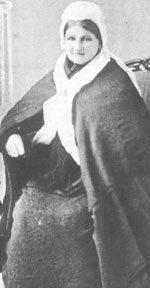 
John Adams has been the Regional Manager of B.C. Heritage and the President of the Old Cemeteries Society of Victoria. He has been a regular contributor on British Columbia history for The Islander. Adams wrote the Historic Guide to Ross Bay Cemetery that takes the reader on 13 tours throughout grounds, visiting the resting places for the remains of the painter Emily Carr and the Honourable John H. Gray, the only father of Confederation buried west of Ontario. Adams is also the author of Old Square-Toes and His Lady, an in-depth look at Sir James Douglas, the fur trader who became colonial governor, and his wife of Scottish and Cree ancestry, Amelia Douglas. It looks behind Douglas' dour public image and sheds light on a lively household. [See James Douglas]

Review of the author's work by BC Studies:
The Ker Family of Victoria, 1859- 1976: Pioneer Industrialists in Western Canada

Articles: 1 Article for this author
Old Square-Toes and His Lady: The Life of James and Amelia Douglas (Horsdal & Schubart $18.95)
Article


"What is new here is that Adams puts human faces on the couple sometimes called the George and Martha Washington of B.C." -- reviewer Joan Givner

One of the liveliest chapters in John Adams' Old Square-Toes and His Lady: The Life of James and Amelia Douglas (Horsdal & Schubart $18.95) - 'Daughters, Daughters, Daughters'- describes the exuberant social life of the governor's flirtatious daughters at 'James Bay House.' Governor James Douglas' permissiveness goes far to dispel the stodgy image suggested by his photograph and by the epithet 'Old Square Toes.' It is exemplified in a letter informing the Mother Superior of their convent school that he is withdrawing his two daughters because the school rules forbade their attendance at a ball on a Royal Navy man-of-war at Esquimalt. He claimed that his position demanded their attendance, and thereafter they attended dances regularly, and entertained officers, as well as newcomers who arrived in town seeking employment in the colonial civil service.

One wonders if he ever regretted his permissiveness when over the years various scandals rocked the household, with pregnancies and hurriedly arranged marriages occurring more than once. Alice Douglas, the younger of the daughters withdrawn from the convent, later eloped with her father's part-time secretary. He quickly arranged a formal ceremony but the marriage was unhappy. Alice separated from her husband, became pregnant by her lover, and moved to California to escape scandal. Douglas' 22- year-old granddaughter, Amy Helmcken, gave birth and got married on the same day, Dr. Helmcken hastily summoning George McTavish, the father, and Bishop Cridge to perform the ceremony.

With Blanshard, Helmcken, Yates, Begbie, Dallas, Finlayson, and Douglas well represented, the index to Old Square-Toes and His Lady reads like a list of Victoria street signs. The historical events that provide the backdrop to the story are also familiar. They include James Douglas' staunch resistance to the American annexation of the Pacific Coast as far as the Alaskan boundary; his establishment of Fort Camosun on Vancouver Island, later to become Victoria; his tenure as governor of the crown colony of Vancouver Island, and as governor of British Columbia; his stewardship of the colony during the sudden influx of people in the gold rush; and creation of towns like New Westminster and Fort Langley.

Douglas retired before Confederation, but his son-in-law, Dr. John Sebastian Helmcken, was part of the delegation that negotiated B.C.'s transition to Canada's seventh province. What is new here is that Adams puts human faces on the couple sometimes called the George and Martha Washington of B.C. He presents a portrait of a marriage, drawing Amelia Douglas out of the shadows, in spite of the imbalance in the information available on the two partners. Besides being a highly visible public figure, James Douglas wrote extensively, leaving a wealth of official documents and private letters to family members. Lady Douglas, on the other hand, did not speak English well, preferred her domestic setting to social events, and is known only through the writings of others. Yet her influence extended beyond family and home, and she was sought after for her nursing and midwifery skills. It was her friendship with Mary Yates, for example, that ended the hostility between their two husbands.

Both James and Amelia Douglas came from racially mixed backgrounds. One disenchanted observer, a labourer's wife, wrote that the governor had spent "all his life among North American Indians and has got one of them for a wife so how can it be expected that he can know anything about governing one of England's last colonies in North America?";

Amelia Douglas was born to an Irish-French Canadian fur trader and the daughter of a Cree chief. Her parents' relationship, formalized far from churches and clergy, was 'a marriage in the custom of the country.' Her father later returned east to make a traditional marriage and have a second family. Decades later, Amelia Douglas' brother challenged the legality of the will by which his father left everything to his second wife and his family. The claim focused on the validity of the earlier marriage. In a landmark case for Quebec jurisprudence, the Court of Appeals confirmed Amelia Douglas' "legitimacy"; by establishing "the legality of native customs and laws in places where the Council of Trent had not been promulgated and where foreign laws had not been imposed.";

James Douglas was born out of wedlock to a Scots sugar planter and a Guianese woman of mixed ancestry. When his father returned to Scotland, the children accompanied him and never saw their mother again. The father subsequently married in the Presbyterian church and the "illegitimate"; sons were sent away to school, and lived in lodgings. At the age of 16, Douglas sailed for Montreal and began the journey that would take him from eastern to western Canada, and from clerk in the fur companies to governor of a crown colony and, on his retirement, to a knighthood.

The events of Douglas' childhood explain the endurance and warmth of his own marriage and the great importance he attached to family life. Like Amelia's parents, the Douglases themselves were united in a "marriage in the custom of the country."; It took place in Fort St James in 1828, when he was 24 and she was 16. Eight years and six pregnancies later, they were re-married by an Anglican chaplain. Of their thirteen children, only six survived--five daughters and a son. The anxiety caused by Douglas' daughters was nothing compared to the disappointment in James Douglas Jr., the twelfth of their thirteen children, and their only son. His upbringing combined indulgence with unrealistic expectations for his education and future position in the world--a disastrous combination, especially since he was physically frail. James Jr.'s performance at the schools he attended in England was lacklustre. And he does seem to have been unusually feckless, at one point enraging his parents by pawning the watch and chain given him as a parting gift. The last of the Douglas children to marry, he died at 33, leaving two sons to carry on the family name. When he died, his father had been dead for six years, but his brother-in-law instigated a lawsuit to prevent the widow of James Jr. from raising her sons in the Catholic faith. She prevailed, and moved with them to England.

Thus the Douglas dynasty proved to be short-lived, most of the next generation being dispersed in England, Scotland and California. The destruction of the James Bay House seems symbolic of the clan's fate. It was torn down in 1906, and its contents sold at auction. Only the Helmcken House still stands on its original site next to the Royal British Columbia Museum. Adams concludes that the existence of British Columbia is the Douglases' real legacy. And, of course, there is a permanent memorial in the street names of Victoria, most of them prominent, well-traveled thoroughfares. Only Amelia Street is tucked away and hard to find.