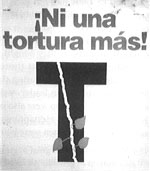 
At the World Council of Churches Assembly in Vancouver in 1983, United Church minister Kathryn Anderson first heard the Guatemalan poet, journalist and exiled theologian Julia Esquivel describe how and why more than one million Maya in a national population of eight million had fled their homes and how thousands of Maya campesinos (rural farmers), labour leaders and students had been torture, disappeared, raped and assassinated by the Guatemalan army. "How was it that I, a fairly knowledgeable social activist, knew virtually nothing about this savage war being waged only a few hours' flight south?" she asked herself. A few days later she attended a coffeehouse gathering for WCC delegates hosted by a Vancouver ecumenical group Guatemala Refugee Project to sponsor Guatemalan labour lawyers Marta Gloria de la Vega and Enrique Torres and their five children. Esquivel read her poetry and there were performances by Teatro Vivo and the Kin Lalat musical group. Anderson decided to visit Guatemala. In 1991, she helped coordinate Project Accompaniment, a network of Canadians who accompanied refugees returning from Mexico into Guatemala, and participated in the program herself for two months. In 1996, she and her partner Wilf Bean served as United Church volunteers with the Fellowship of Maya Presbyteries. Guatemala's civil war supposedly ended on December 29, 1996. Her book Weaving Relationships: Canada-Guatemala Solidarity (Wilfrid Laurier Press, 2003) recounts the context for refugee support throughout the 1980s and 1990s.