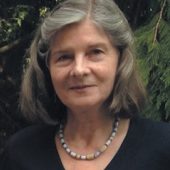 
The year is 1811, the apex of Napoleon's empire. Two French travelers meet en route to Italy -- he playing truant from his official responsibilities, she bent on escaping her empty life. She opens his mind to the possibility of a woman as equal and friend; he urges her to defy convention and pursue her heart's desire. Their inner conflicts are echoed among the Italians they encounter. A Promise on the Horizon (Granville Island Publishing $24.95) by Ann Pearson is based on episodes in the youth of French writer Stendhal. The novel uses his Italian diary as the frame, interweaving it with fictional events and characters to create a nuanced portrayal of the Napoleonic era. Pearson grew up in Suffolk, England, did an Honours' degree in French at the University of London before moving to Vancouver where she completed a PhD in French literature. Subsequently, she taught French for a number of years before joining the Arts One programme at the University of British Columbia. She is currently working on a second Napoleonic era novel, set in Cornwall this time.

The year of Emperor Napoleon's Comet

Ann Pearson's A Promise on the Horizon takes the reader on a delightful journey of discovery to Napoleon's Italy. The story is seen through the eyes of two travellers -- Henri Beyle (to be known later as Stendhal, the French novelist, 1783-1842) and a mysterious young woman, Marie Vernet, travelling alone -- an unusual occurrence in those days.

The year is 1811 -- a very auspicious time. It was called the year of the Emperor Napoleon's Comet which appeared in the sky and was seen as an omen because, in March of 1811, the long-awaited heir to the Emperor was born. Most people thought this meant the old order was finally over and great new things lay ahead on the horizon. But, despite the dawn of a possible new dynasty, the prospect of war also still lies ahead.

Pearson bases her story on Beyle's observations in his authentic 1811 journal where we learn about his motley group of fellow travel companions as well as his compelling and overbearing opinions. As Pearson herself says, "his frankness can still surprise the modern reader."

She then introduces another traveller, Marie Vernet, the fictitious young woman whose account begins with these words:

For the first time in my life I am completely alone. Though I had anticipated the discomforts of the road, I had not foreseen the anguish on finding myself at nightfall in a place where I do not know a single soul. But I cannot turn back now (p. 6).

With these lines, Pearson hooks the reader into the story. Who is this woman? And what is she trying to escape from? Or run to?

Like Beyle, Vernet also appears to be searching for something. In her case, now that she is a woman of means, it is independence, while at the same time she is trying to come to terms with her past. In Beyle's case, it is something far deeper. Bored with his life in Napoleon's bureaucracy, he takes unauthorized leave from his post to search for happiness and a better understanding of his restless nature. He believes that by returning to Italy he might find answers.

Both protagonists are drawn to the rich culture of Italy and tell of their parallel experiences as they travel. It is intriguing for the reader to see life in 1811 from a man's and a woman's perspective.

In his diary, Beyle appears to be obsessed with love and women. He admits that he only seems happy in an intimate relationship and yet his fickle nature makes him incapable of faithfulness for long. In 1811, he is re-tracing a journey he made ten years earlier as a lovesick young man obsessed with a woman much older than he was. Meanwhile, Marie Vernet is constantly reflecting on her past and seems afraid to embark on an unknown future before accepting and understanding the past.

Although the book contains passages of vivid description, I found it lagged in places, weighed down by too much detail. Having said that, these descriptive passages would be invaluable to a researcher, despite not being particularly conducive to an attention-grabbing novel. In a non-fiction book on the Napoleonic era, they would shine.

However, Pearson explains her reason for writing A Promise on the Horizon in this way: "Stendhal kept copious notes on his Italian journey which I could re-frame and interweave with fictional events to create this moment in the Napoleonic era when a threatened invasion of Russia is on the horizon."

For most of the book, Pearson manages to pull off this gigantic feat with an easy style. With so much material to work with, it must have proved difficult to omit anything.

The reader is left with the question: did the two travellers find their "promise on the horizon?"