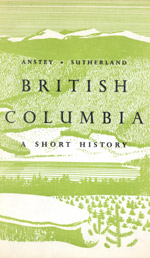 
Born in England circa 1874, he came to Vancouver in 1910 and became principal of Kitsilano High School, then inspector of schools in the Okanagan, then in the Fraser Valley. From 1923 to 1939 he was vice-principal of Vancouver Normal School. In 1927 he first published a school text called the Romance of British Columbia. It was reprinted at least four times. He died in 1951. In 1957, to mark the B.C. centenary, Neil Sutherland, a West Vancouver teacher, revised and reduced the school text, with a new title, to 55 pages, with illustrations by Huntley Brown.