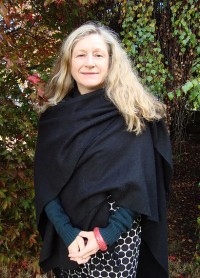 
Ellen Arrand is a novelist, short story writer, and playwright and has a Master of Fine Arts Degree in Creative Writing from the University of Guelph-Humber.

While researching her grandfather's role as a contractor in the building of the Borden Bridge in Saskatchewan, Victoria's Ellen Arrand uncovered family secrets and mysteries leading to her feminist/historical novel Public Works Private Souls (Beach Holme 1993)

The Trutch Street Women (Ekstasis Editions 2007) is a coming of age story set in Victoria, where a group of women in search of inexpensive rent come together to share a house and their experiences.

Trouble-shooting a marriage as well as a five-month international tour of a one-act version of Hamlet takes a look at the struggles of the "almost famous" in Bear Me Up Stiffly & One Man Hamlet (Ekstasis Editions 2011).

In Hotel Abundancia (Ekstasis Editions 2016), Sara embarks on a journey of the heart and self-reflection after the death of a close friend. Traveling from the mystical villages of Mexico, the pristine backwoods of Maine, the lush verdure of Vancouver Island, and the lake-bejeweled desert of the Okanagan Valley allow Sara to encounter a multitude of characters that provide lessons that are both inspiring and painful. As Sara comes to a better understanding of herself she must let go of what she fought so hard to find make the most difficult decision of her life.


After dinner and many tequilas at the Hotel Abundancia, Sara and her new friend Julie amuse themselves by wondering how their hotel in Real del Catorce, Mexico, got its name. They make up a story about a little girl named Abundancia.

"Then they make up another one about their separate possible futures,"; says Ellen Arrand, author of Hotel Abundancia. "Sharing stories is the essence of countering the effects of oppression and healing past hurts. The past must be dealt with.";

And Sara, we will learn, has had her share of hurts.

First, her unaffectionate parents made her feel invisible, leaving their only child vulnerable to any signs of love or attention. When she had finally found a circle of friends at her school in the Okanagan, her parents' decision to move to Victoria was devastating.
By the time Sara met her first love, Harley, her self esteem was so low that she settled for an unsavory, abusive relationship, telling herself things would get better and Harley would change. Wishful thinking can be deadly.

It was her friend Claire who had the solution. Claire introduced her to the Trutch Street women, a group of mainly single mothers, living in apartments in a few of Victoria's converted mansions. Sara found a home and a refuge among a circle of supportive, strong women. But then Claire died.

Into middle age and living on the edge of poverty as a substitute teacher, Sara has allowed herself to be convinced that she needs to get away, to get back to her poetry, to return to Mexico for a third time. Her biggest encouragement has come from her beloved daughter, Elk, the only good thing that came out of her union with Harley.

"I divided the book into three parts,"; says Arrand, "because Sara makes three, separate extended journeys to Mexico. The first as a novice, the second for pure joy to be with her lover, and the third to find herself again and pick up her struggles and triumphs.";
A great deal of Hotel Abundancia recalls Sara's complicated but very sexy relationship with a much older lover, Saul, who seduces her with his storytelling abilities.

"I think my book is primarily about storytelling and memory,"; says Arrand. "How storytelling connects us, heals us, and transforms us. And how we make stories out of memory.

"Sara's past is both a story that haunts her and a story of liberation. She heals herself from that huge, romantic, mystical love of Saul because of the politicization from the Trutch Street women's group. In the end, she gains herself.";

Also a playwright, Arrand has written The Trutch Street Women and a one-act play, Bear Me Stiffly Up, that was published by Ekstasis Editions and produced in Victoria by Theatre Inconnu. Her first novel, Public Works Private Souls, was published by Beach Holme in 1994.