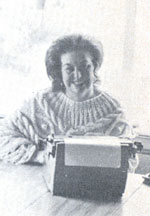 
Nadine Asante has written for various periodicals, including the Scottish Daily Express in Glasgow, the Manchester Guardian and the Montreal Gazette. She was a 'Home' page editor for the Vancouver Sun in the 1960s in the Leisure section for editors Barry Broadfoot and Alex McGillvry; then she wrote for The Sun and The Province as a Seniors columnist in the 1980s and 1990s.

Her father was Welsh and her mother was born in Vernon, B.C. "My parents were unfortunately in Seattle when I was born," she said, "but brought me back to B.C.

As Nadine Asante he wrote The History of Terrace (Terrace Public Library Association, 1970, 1971; third printing 1979), containing stories of early settlers and present day services and organizations in Terrace. "It sold 4,000 copies," she quips, "because I named everyone in town."

At age 90, as Nadine Jones, living in Richmond, she self-published Four Great "F" Words: Fur, Feathers, Fish & Fun (Nadine Jones 2012 $16.99 978-0-9917511-0-5), a collection of short, non-fiction pieces, mostly about animals. They stories many recall experiences in northern B.C. (Terrace) where she and her husband bought 48 acres on the former site of a cedar mill. Five of the acres were cleared. They built a log house and outbuildings with the help of their two daughters, aged eleven and fourteen.

Articles: 1 Article for this author
Mutiny on the Skeena
Article (2013)


CORRECTION: In its original form, the following article about Nadine Jones [Autumn, 2013] erroneously stated she "uncovered the only known mutiny in the Canadian Army"; involving a revolt by the 15th Brigade in Terrace, in 1944, and that it was hitherto unknown. On December 21, 1918, French-Canadian soldiers mutinied in the streets of Victoria, B.C. en route to being sent to Vladivostok.-Ed.

But that's okay. She already has a claim to fame. Back in 1970, while researching The History of Terrace for the Terrace Public Library Association, she uncovered a little-know mutiny in the Canadian army.

As Nadine Asante, she interviewed an old-timer named Floyd Frank who recalled the wartime mutiny of Canadian 15th Brigade soldiers stationed in Terrace in 1944. This story, corroborated by four other old-timers, appeared in her local history that marked the town's centenary.

Shortly after the book's publication, Jones (Asante) was surprised to receive a phone call from John David Hamilton, a CBC documentary producer and book reviewer in Toronto, saying he was going to review her book.

"I wondered why a small book about a little-known town, written by an unknown author, deserved to be reviewed on CBC radio", recalls Jones, "until I heard him concentrating on a chapter that I had called Mutiny on the Skeena.";

Before the arrival of more than 3,000 troops and 3,000 construction workers in the early 1940s, Terrace was a sleepy outpost of 400 souls, but its location on the CN train line to Prince Rupert meant it was important in the process that would ensure American troops could have access to the coast to fight the rumoured Japanese invasion.

"There was nowhere to go,"; she recalls, "and nothing to do, and very few girls, so animosity between soldiers and workers reached a boiling point. There was a battalion of conscripted French Canadian soldiers, RC Engineers from Camp Borden and a large number of soldiers from Prince Edward Island. Something had to give....and it did.";

According to Floyd Frank, the French Canadians "came over the hill like lemmings." They were soon joined by disgruntled Canadian regular army personnel. When the officers rushed to the munitions depot, they found it empty. Their orders were ignored. The town of Terrace was held hostage by Canadian soldiers for over two weeks.

Eventually a brave officer rode the armoured train into Terrace from Prince Rupert. Speaking into the muzzle of a machine gun, he told the mutineers there was a plane loaded with bombs at the airport and resistance would be futile. By this time many men had deserted, most hopping freight trains to go back east.

This military embarrassment was hushed up. The aftermath of the mutiny was anti-climactic. There were just three arrests; one for a soldier taking off his uniform, two others for insubordination.

In the early 1970s, John David Hamilton came to Terrace and interviewed Jones (Asante) in her living room. He also made a trip to Vancouver Island to interview the head of Pacific Command at the time of the mutiny, Major General George Pearkes. These interviews spawned an hour-long CBC documentary that verifies the mutiny.

Now Four Great "F"; Words recalls a family's experiences in northern B.C. after the author and her husband bought 48 acres on the former site of a cedar mill, building a log house and outbuildings with the help of their two daughters, aged eleven and fourteen. Nadine Jones is not expecting any calls from CBC in Toronto.

Now living in Richmond, Nadine Jones has written for various periodicals, including the Scottish Daily Express in Glasgow, the Manchester Guardian and the Montreal Gazette. She was a 'Home' page editor for the Vancouver Sun in the 1960s in the Leisure section for editors Barry Broadfoot and Alex McGillvry; then she wrote for The Sun and The Province as a Seniors columnist in the 1980s and 1990s.