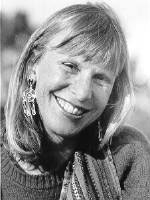 
Born in London, England in 1943, she studied theatre, worked as an actor and later became a pre-natal counselor. She came to Canada in 1967 to visit Expo and decided to stay, working for ten years as a pre-natal counsellor before becoming a television and print journalist. She co-founded the Metro Toronto Manic-Depressive Assn. and received an award for 'supportive and responsible journalism' from the Emily Stowe Shelter for Women. After surgery on her spinal chord, she remembered ten years of incest and has since devoted her life to working for and with child sexual abuse and incest survivors. Her first book is Triumph: A Journey of Healing from Incest (McGraw-Hill Ryerson, 1991) with a foreword by June Callwood. In 1998, she received a Master's degree with distinction from the University of London, England. [Photo: 1991, Anna Weyburg-Stebner.]