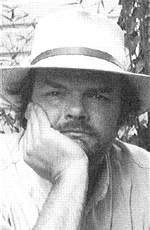 
"Strathcona will not only survive, but thrive." -- John Atkin

A resident of one of Vancouver's oldest houses in Strathcona (dating from 1898), John Atkin has become one of the province's most integral heritage experts and history enthusiasts. He has received three City of Vancouver Heritage Awards. Atkin published a series of walking tours for the Vancouver Community Arts Council and co-authored Heritage Walks Around Vancouver (Whitecap, 1992) with heritage artist Michael Kluckner. It explores eight neighborhoods on a street-by-street basis. Two years later he published an appreciation of 'the birthplace of Vancouver' entitled Strathcona: Vancouver's First Neighbourbood (Whitecap, 1994). Atkin also contributed the article on Strathcona in Chuck Davis' Greater Vancouver Book. "In the beginning Strathcona was simply known as the East End," he wrote. "This referred to an area that took in everything east of Main to Campbell Avenue and from Burrard Inlet to False Creek. At that time, False Creek was four times its present size; at high tide its waters lapped at the pilings of buildings on Pender Street and extended east to Clark Drive. The Strathcona of today is bounded by Hastings, Campbell, Gore, Atlantic and Prior Streets."

Between 2004 and 2015, more than 10,000 demolition permits were issued for residential buildings in the city of Vancouver. As of 2015, an average of three houses a day were being torn down, many of them original homes built for the middle and working class in the 1920s, '30s and '40s. Very few are deemed significant enough to merit heritage protection, but Caroline Adderson and other Vancouver writers believed the demoliton of these dwellings amounted to an architectural loss. She therefore spearheaded Vancouver Vanishes: Narratives of Demolition and Revival (Anvil 2015), co-authored with John Atkin, Kerry Gold, Evelyn Lau, Eve Lazarus, John Mackie, Elise & Stephen Partridge and Bren Simmers. The introduction is by heritage artist and activist Michael Kluckner--who has published a book called Vanishing Vancouver--and photographs are by Tracey Ayton and Adderson.

Atkin was founding Vice President of Heritage Vancouver and he has curated City Lights: Neon in Vancouver at the Vancouver Museum. He collects 19th Century travel writing and diaries. In 2004 he became the editor of the province's most essential publication for history buffs, the B.C. Historical News, and remained at his post until 2010.