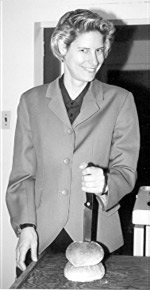 
Bassist Wendy Atkinson has performed with numerous groups and produced her own solo CD called Trim. She performed at the Vancouver Folk Music Festival with poet Bud Osborn and guitarist David Lester in 1998, in conjunction with Osborn's CD called Hundred Block Rock (it received national airplay and was made into a video that has been screened at a variety of video poem festivals around the world and was acquired by CBC's national TV show Zed). She is the co-author of I've Fallen in Love With You (Get to the Point Publishing) and author of A Back and Forth Story, which was exhibited around North America as part of the touring Bookmobile Project (Montreal/Philly). Her book Summer BBQ (2005) was also selected for inclusion in the Bookmobile Project.

She lives in Vancouver, Canada

REVIEWS:
"Her spare, atmospheric and often chilling movements owe more to the ominous ambience of godspeed you! black emperor or the droning dread of Labradford." - eye weekly

"...the stunning blanket of warm night that Atkinson creates with four strings and 4-tracks. Like Daniel Lanois's ethereal slide-guitar work, the bass is presented here with all its possible timbres and tones, sliding in and out of time, and weaving wonderful walls of bassy bassness." --Broken Pencil: magazine of zine culture and the independent arts

"...even more remarkable is that her tools of choice are electric, acoustic, and upright basses, instruments more generally featured in an accompanying role than up-front....She's at her best, though, when she composes by setting several different bass sounds against each other, as she does on "Somehow Dissolves,"; "Stumble,"; and "New Terrorism."; Plucking some notes while letting others swell up from silence, concocting thick, bowed drones and slow-moving fuzz-toned atmospheres, deploying radio static and seasick glissandos, she takes us places no chops monster could ever access - and although dark, the ride is fascinating." -- Georgia Straight, Vancouver's Entertainment Weekly

"It's become increasingly common in jazz and improv circles for bass players to go it alone, but unaccompanied solo albums by rock bassists still aren't very common. Vancouver-based Wendy Atkinson's Trim could give such projects a good name......Her melodies are quite song-like and remind me of the stark, simple constructions favored by post-punk like the Mekons, the Young Marble Giants an the Raincoats twenty-odd years ago."; --Signal to Noise Magazine

"Atkinson has the chops and you have to hand it to her for recording and mixing this on a 4-track." --Chart Magazine

Trim has consistently charted on college radio stations across Canada and been heard nationally on CBC's Brave New Waves.

"We're quite enjoying your Trim album. Thanks for the art."; - Scott Stevens, MD, CFRC (Kingston, ON)

"We appreciate this type of music outside the mainstream, thanks again."; - Brandon, MD, KBOO (Portland, OR)