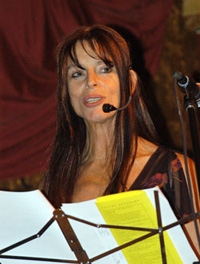 Leanne Averbach is a Canadian writer, performance poet and experimental filmmaker. She has been published in numerous literary magazines and performed her work with musicians across Canada, the US and Italy.

Her first book Fever (Mansfield Press, Toronto 2005) was short-listed for the national Gerald Lampert Memorial first poetry book prize in 2006. Her companion CD Fever is a fusion of her spoken words and the blues/jazz accompaniment of the group Indigo. "The poems swing from worldly to wild." (Georgia Straight 2006)

Her first video-poem Carwash can be viewed on the site and her second short film, Teacups & Mink, was selected as Best Short International Film, Poetic Genre, and Best Directorial Debut at the New York International Independent Film & Video Festival 2008, as well as a Best Short Film at the Palm Desert Film Festival 2008.

Leanne formerly taught at the University of British Columbia Language Institute. She holds an MA from Simon Fraser University and an MFA from The New School, New York.