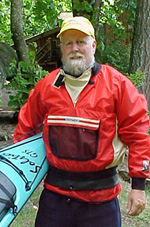 Gary Ray Backlund is an avid kayaker who has helped organize the Vancouver Island Paddlefests in Ladysmith, B.C. Backlund has also served on the Cowichan Valley Regional District's Round Table on the Environment. His family owns and operates B.C.'s Managed Forest #127. He and his daughter Katherine are volunteer wardens for the Woodley Range Ecological Reserve, the home of 29 rare plant species. He works as an architectural designer/draftsman and building consultant. He has delivered workshops on housing maintenance for First Nation communities throughout B.C. and the Yukon. Co-authored with Leo Hebert, Home Maintenance for First Nations was written under contract for Canada Mortgage and Housing Corporation and is also used by the Yukon Government. Backlund also wrote The Wonderful History of Page Point at the request of the owners of the Page Point Inn. He researched the the history of Page Point and the original homesteader, David Page.