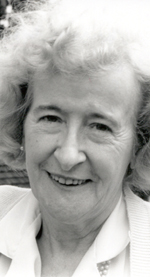 
Born on March 18, 1924 in Southey, Saskatchewan into a large family, Winona Louise Baker moved to B.C. in 1930. Living in Nanaimo, she raised four children with her husband Art. A Haiku specialist, she received the top global prize in a 1989 World Haiku Contest in honour of Matsuo Basho's 300th anniversary. After self-publishing with Red Cedar Press, she released Moss-Hung Trees book with Gabriola's Reflections Press. It takes its title from her prize-winning haiku. In 1994 the Romanian Haiku Society gave her a Commemorative Medal and in 1997 an Award of Excellence for her paper presented at a Symposium on Basho in Bucharest. The Croatian Haiku Association also presented her with an award in 1997. Winona Baker's work is in more than 70 hc/pb anthologies in North America, New Zealand, Japan and Europe; including The Haiku World: An International Poetry Almanac (Kodanshu International 97- 621 poets from 52 countries writing in 25 languages); and has been translated into Japanese, French, Greek, Croatian, Romanian, Yugoslavian. She has haiku in The Book of Hope an international anthology published to raise funds for children in Afghanistan 2002. Her work is archived in the Haiku Museum, Tokyo; Basho Museum, Yamagata; Haiku Mu in CA and the Haiku Collection in Fraser-Hickson Library Montreal.

AWARDS:
- Even a Stone Breathes - Haiku and Senryu 2000 in the Encyclopaedia Britannica Book of the Year supplement section on Canadian Literature