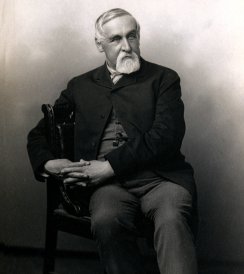 
Maturin Murray Ballou was born in Boston in 1820. He was a founder of the Boston Globe newspaper. In 1873, an economic downturn loomed and public interest in newspapers appeared to be waning. Ballou recognized that the newspaper business was becoming a hard sell. He retired from the Boston Globe and traveled with his wife, Mary Anne (Roberts). Ballou continued to write, penning a series of popular travelogues about the countries they visited. In 1882, Ballou, and his wife, "circumnavigated the globe."; Ballou died in Egypt, in 1895. His body was repatriated to the US, and he was buried in Boston. His travel narrative, The New Eldorado: A Summer Journey to Alaska (Boston: Houghton, Mifflin, 1889,) has a section on Victoria and British Columbia.