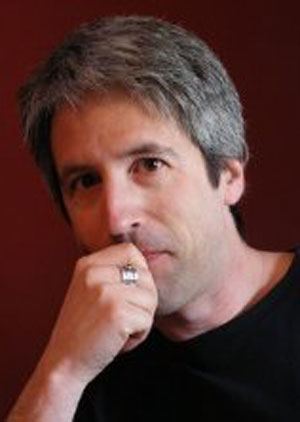 
Dan Bar-el grew up near London, Ontario. He trained at Ryerson Theatre School and has worked as an actor in Toronto and performed comedy across Canada. He has organized poetry events in Vancouver and worked with children as a childcare worker, preschool teacher and storyteller. His first book is aimed for ages seven to eleven. Bar-el has contributed to an anthology, World of Stories (Gumboot Books, 2008) and he has travelled across Canada visiting schools and libraries as an author and as a storyteller.

When a cow named Audrey learns she could be headed to the slaughterhouse, she goes AWOL from Bittersweet Pastures in Dan Bar-el's amusing and heartfelt Audrey (cow). Her farmyard getaway adventure is narrated by thirty voices, as if the tale of Audrey's escape is an extended news story. We follow her fate with commentaries by six humans, four cows, three sheep, two sheep dogs, one pig and a silly rooster. Back in 2002, Bar-el read a news item about a thousand-pound Charolais cow that escaped from a slaughterhouse in Cincinnati by jumping over a six-foot fence. It avoided capture for eleven days, providing inspiration for Bar-el's story. The cow was dubbed Cincinnati Freedom and given the key to the city. Its notoriety prevented her death. She lived the rest of her days at an animal sanctuary in New York.

EMPLOYMENT OTHER THAN WRITING: Preschool teacher

Articles: 1 Article for this author
Things Are Looking Up, Jack (Orca $7.95)
Article


The Jack in Dan Bar-el's Things Are Looking Up, Jack (Orca $7.95) is none other than King Jack, the egalitarian son of Mrs. Goose who insists on fetching his own pail of water. Unfortunately, as his bossy sister Princess Jill is quick to point out, Jack is a klutz. But it's not only Jack and Jill who go a-tumbling. Humpty Dumpty takes a spill, too. A baby's cradle leaves the bough. The sky is falling and so, for that matter, is London bridge. The cow can't quite clear the moon. Clearly something's amiss in the kingdom. It's up to klutzy Jack, his domineering sister and the fetching Miss Bo Peep to put things right and solve the mystery of why everything is falling down in the land of nursery rhymes. Dan Bar-el is a Vancouver preschool teacher who once met a grizzly in Jasper National Park and saved his bacon with a little harmonica playing. Sounds like the makings for a King Jack sequel. 1-55143-278-1
[BCBW Summer 2004]