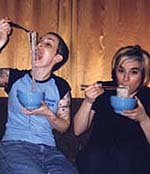 
Vegan cooking isn't weird. It just means making food without animal products. If you love animals, and if you have the rational power to remember that humans are animals, satisfying recipes are now available in the bestselling cookbooks by Sarah Kramer and Tanya Barnard, The Garden of Vegan (Arsenal $22.95) and How It All Vegan.
The Kramer/Barnard collaborations are vegan Bibles for the uninitiated, campy and serious at the same time. Former lazy vegetarians, they use tongue-in-cheek marketing to present themselves as mighty Vegan Warriors, 'kicking vegan ass,' using fun like some folks use dollops of ketchup, dressing up for photo shoots.
"Tanya and I collect all sorts of vintage things,"; Kramer says. "We are both second hand store/garage sale-aholics. My house is packed with all sorts of kitschy crap and my closet is bursting with vintage clothing that I don't always get to wear. Now I have a reason to dress up!";
Beneath their flippancy, there's a serious side. Kramer was once diagnosed with chronic fatigue syndrome, having weighed 83 pounds. "Why am I vegan?"; she says. "How can I not be? I can't love one animal and eat another. I could barely eat at all. It was an ordeal just to pick up a fork."; She says she became friends with food again thanks to vegan recipes.
The duo's success is about lifestyle as much as cuisine. You are what you don't eat. Their website has a chat room about vegan pregnancy, tofu, vegan cosmetics, migraines and living in a leather-free world. And no, cuz people have asked, they're not a couple. 1-55-152-128-8