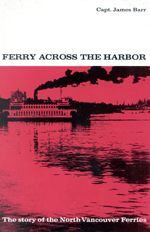 
Born in 1900, James Barr went to sea at age 16 during World War I. He served for 15 years in the Royal Navy, in British and Canadian deep sea ships, and in the Royal Canadian Navy during World War II. He died in Victoria in 1969 just prior to publication of his brief history of the ferry services between North Vancouver and Vancouver. John 'Navvy Jack' Thomas first began taking paying customers across Burrard Inlet in 1866; a small steamer called Sea Foam operated between Granville, Hastings and Moodyville from 1868 to 1873--followed by the Chinaman, the Lily and the Elonora. The Senator commenced the service in 1888. The first ferry to operate exclusively between North Vancouver and Vancouver was the steam-powered Norvan in 1900, built in Vancouver. The North Vancouver Ferry and Power Company, owned in Ontario, took over operations in 1903 and added the St. George, which incorporated vehicles. The Norvan and the St. George became known as Ferry No. 1 and Ferry No. 2 respectively. Rival companies also operated until the City of North Vancouver took control and operated the ferries as a public utility, adding 1176-ton Ferry No. 3 in 1911. The Second Narrows Bridge was completed in 1925. Three serious accidents with ships (S.S. Norwich City; 1928, S.S. Losmar, 1930; Pacific Gather, 1930) led to a closure of the bridge in the early 1930s. During this period, Captain James Barr was scrambling for employment. He hurriedly obtained a job as a mate on an emergency replacement ferry, the Washington, brought from Puget Sound. He later became relieving Master, handling all three ferries. The statistical records show that the ferries carried a total of 112,466,693 passengers between 1919 and the final trip on August 30, 1958. The No. 5 Ferry remained in North Vancouver as the Seven Seas Restaurant at the foot of Lonsdale Avenue.

Ferry Across the Harbour (Mitchell Press, 1969)