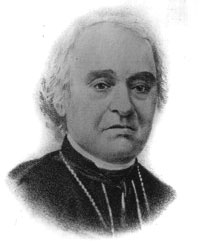 
Inventor of the noteworthy West Coast invention "The Catholic Ladder," Francis Norbert Blanchet was a Catholic missionary born on September 5, 1795. Ordained at the Petit Seminaire of Quebec in 1819, he was sent overland to serve as Vicar General of the Oregon Mission in 1838, accompanied by Modeste Demers as his assistant. Based initially at Fort Vancouver, they were the first priests in the Oregon Territory, but they did not generate the first Christian mission. [Methodist preacher Reverend Jason Lee had already established the first mission post on the east side of the Willamette at French Prairie, near present-day Oregon City, Oregon, in 1834.]

Whereas Demers had a knack for languages, Blanchet was frustrated by his inability to preach to Aboriginals. His solution was a vertical scroll that was hung from trees or a pole to illustrate God's wondrous ways. In ascending horizontal bars, this "ladder" depicted the evolution of Christian-based theology from Adam and Eve, at the bottom, to Blanchet's own mission, at the top. Along the way, his Catholic converts were entertained by pictures of the Tower of Babel, Solomon's Temple, Three Wise Men, Christ's crucifixion and Protestant Heresy.

Devised in 1839 at Cowlitz, this show 'n' tell scroll contained forty parallel lines to represent four thousand years before Christ; followed by 33 points to represent the years of Christ's life. Three crosses represented his death. The onset of the Catholic Church after the crucifixion was falsely represented by a church and twelve perpendicular marks (for the twelve apostles). To bring the story entirely up-to-date, the ladder had 18 horizontal marks and 39 points to illustrate it was precisely 1839 year since the death of Christ.

Apparently the Nisqually Aboriginals who first saw the ladder had a penchant for math. As Blanchet reported to the Archbishop of Quebec in 1839: "These poor natives showed themselves very eager to hear tell of the Great Master. Petit-vieux served as interpreter, and translated into their language, the Chinook jargon, of which I made use in instructing them. I explained to them the creation of the world, the fall of the first man, the promise of a Saviour, His birth and death, the love of Jesus Christ for the human race." For much of the 19th century, Blanchet's Catholic Ladder was used by missionaries on the West Coast and linen copies of it were distributed to Aboriginal communities--the equivalent of a popular video today. Blanchet's Chinook dictionary for priests also became one of the most reprinted texts in Pacific Northwest history.

Blanchet went to St. Paul, Oregon, where he founded St. Joseph's College in 1843. That same year he became vicar-apostolic and received the title of Bishop of Philadelphia. Blanchet travelled to the Vatican, via Canada, and was consecrated Bishop of Oregon in 1845. Pope Pius IV made Oregon an ecclesiastical province in 1846. There were three suffragan sees: Oregon City (under Blanchet, who assumed title Archbishop in 1850); Walla Walla (under his brother, Magliore Blanchet); and Vancouver Island (under Modeste Demers). Blanchet remained in Oregon until his retirement in 1879. He died on June 18, 1883.

[His brother Augustin-Magloire-Alexandre Blanchet was ordained to the priesthood on June 3, 1821. He was consecrated as Bishop of Walla Walla by Bishop Ignace Bourget of MontrÃ©al on September 27, 1846. He accompanied Father A.B. Brouillet and two ecclesiastical students from MontrÃ©al, together with Father Rosseau and five Oblate Fathers from St. Louis, and he reached Walla Walla in Washington State on September 5, 1847. Bishop Augustin-Magloire Blanchet resigned his office in 1879, and died on February 27, 1887.]

Catholicism spread into Washington State under Blanchet's jurisdiction. Three Jesuit missions were established among the Pend d'Oreilles and Colvilles of the Upper Columbia in 1844. With the arrival of Oblates in 1847, Father Pandosy became active with the Yakima, Father Ricard preached near the present site of Olympia and Father Casimir Chirouse preached among the tribes of Puget Sound. Fathers Rousseau and MesplÃ©e founded a small mission at the Dalles of the Columbia River in 1848.

Blanchet, Francis Norbert. A Comprehensive, Explanatory, Correct Pronouncing Dictionary, and Jargon Vocabulary, to which is Added Numerous Conversations Enabling any Person to Speak Chinook Jargon. (Portland: S.J. M'Cormick, 1852). At least seven editions were released with various titles up to 1879. A copy of the fifth edition in the British Columbia Archives is entitled Dictionary of the Chinook Jargon: to which is added numerous conversations, thereby enabling any person to speak Chinook correctly (Portland, Oregon: S. J. McCormick, 1879). Later editions were compiled by John Kaye Gill (1851-1929). An 18th edition was published in 1960.

Blanchet, Francis Norbert. Historical Sketches of the Catholic Church in Oregon; during the past 40 years; 1838-1878 (Portland, Oregon: Catholic Sentinel Society, 1878)

Blanchet, Francis Norbert & Modeste Demers. Notices & Voyages of the Famed Quebec Mission to the Pacific Northwest. Being the correspondence, notices, etc. of Fathers Blanchet and Demers, together with those of Fathers Bolduc and Langlois. Containing much remarkable information on the areas and inhabitants of the Columbia, Walamette, Cowlitz and Fraser Rivers, Nesqually Bay, Puget Sound, Whidby and Vancouver Islands while on their arduous mission to the engages of the Hudson Bay Company and the pagan natives 1838 to 1847. With accounts of several voyages around Cape Horn to Valparaiso and to the Sandwich Islands, etc. Englished out of the French by Carl Landerholm. (Portland: Oregon Historical Society, 1955).