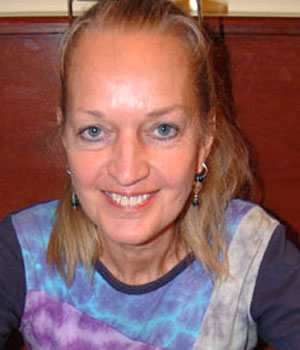 
Born in Holland in 1953, Mieke Blommestein of Revelstoke immigrated with her husband and two children to Canada in 1982. After four years in Canada, they became Canadian citizens. She worked in our local hospital as an Long Term care Aid for 10 years, taking care of the elderly. Meditation became part of her life during the evening hours. "It was during this time that I was introduced by a vision of a monk that invited me in his garden. He introduced himself as the monk Emanuel, and said he was a story teller," she says. From 2003 onwards, Blommestein received stories via Emanuel, her visiting monk spirit. She decided to self-publish the first story that the monk gave her in 2003, The Tale of Miss Spider that spun her web, written for children aged three to seven.

It's the story of a spider who catches a fly in her web. The spider is conflicted by two voices in her head. One is angry, and urges her to eat the fly; the other is soft and loving, and encourages her to listen to the fly's pleas and let it go free. She then meets a butterfly, who helps Miss Spider listen to her soft inner voice. "It is a story about love," says Blommestien. "We are so busy that we can't listen to our soft inner voices anymore. The business of the world just sucks us up."

The Tale of Miss Spider who spun her web. Edited by David F.Roony; illustrated by Diane Perruzzi; designed by Fiona Raven. (Sojourner Publishing, 2010),