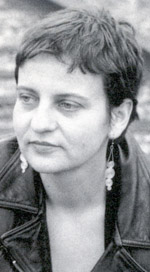 
Born in Edmonton, Alberta of Ukrainian descent, Bociurkiw was living in Vancouver as a feminist/lesbian activitist, writer and film/videomaker when she published The Woman Who Loved Airports (1994), a collection of personal narratives and stories juxtaposing slice-of-life lesbian street lore with stories that explore ethnicity, family and community amid complicated political times. Moving to Toronto, she published a novel, The Children of Mary (2006), a food memoir, Comfort Food for Breakups: The Memoir of a Hungry Girl (Arsenal Pulp, 2007) and a collection of essays, Feeling Canadian: Television, Nationalism and Affect (Wilfrid Laurier Press, 2012).

Articles: 1 Article for this author
Halfway to the East (Lazara $14.95)
Info


Film and video producer Marusya Bociurkiw travels to Eastern Canada and Eastern Europe to trace her Ukrainian genealogy in Halfway to the East (Lazara $14.95), described as a 'polyphony of identity and voice'. "This is a journey home in which all the border crossings--across languages, bedrooms, boundary lines--are bittersweet adventures,"; says Stan Persky. Bociurkiw's collection of stories is The Woman Who Loved Airports. 0-920999-38-7