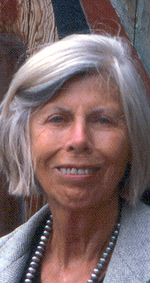 
As a mother and daughter team, Maria Bolanz and Gloria C. Williams have examined the significance of Tlingit carvings of interior house posts, portal entrances and free standing totem poles with their crests in Tlingit Art: Totem Poles & Art of the Alaskan Indians (2003). Gloria Williams is a member of the Taku River Tlingit First Nation in Canada, a member of the Tlingit/Haida Tribe in southeast Alaska, and a member of the Cook Inlet Regional Corporation (a corporation formed by the Indian land claims settlement in Alaska). After studying at the University of Alaska, she has worked at the Alaska Native Medical Center in Anchorage. Her mother Maria Bolanz is a descendant of the Blackfoot Nation and through marriage to a Tlingit she became a member of the Carcross/Tagish First Nation in Canada and a member of Cook Inlet Regional Corporation in Alaska. She received a BA from Western College in Oxford, Ohio and an MA from Stanford University. She has also studied at the University of Madrid in Spain and at the University of Guadalajara in Mexico. After retirement, she secured a degree in anthropology from the University of Alaska.