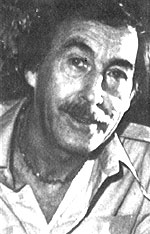 
As one of the first four books from Randy Fred's Theytus imprint, Stephen Bosustow's biographical portrait Queesto: Pacheenaht Chief by Birthright (1981), the story of Chief Charlie Jones, has not received the attention it deserves as one of the best book-length, firsthand accounts of Aboriginal life on Vancouver Island prior to the dominance of white civilization.

Born in Victoria, Stephen Bosustow moved to Hollywood at age 12 and received three Academy Awards for his work in animation, most notably for Walt Disney Productions and as the producer of Mister Magoo cartoons. In 1961 he sold his animation studio, UPA Pictures, and formed Stephen Bosustow Production to produce and distribute Social Studies and Language Arts materials for educational purposes. In July of 1976 he came to the Pacheenaht Reservation near Port Renfrew on Vancouver Island to visit his cousin, Roberta Bosustow Jones, who had married Charles Jones Jr., son of Chief Charlie Jones who had just celebrated his 100th birthday earlier that same month. Finding the venerable chief was still a lively raconteur, Bosustow recorded Chief Jones' memories dating back to the 19th century for an 'as told to' autobiography. According to Randy Fred, Roberta Jones read an article about the formation of Theytus Books and contacted him about the book project. The transcriptions of the taped interviews with Charlie Jones were edited by Randy Fred and Stephen Guppy; they divided the ghost-writing work into halves. Stephen Bosustow died in 1981, the year Queesto was published. "For me, there was a lot of sentiment in the project," Randy Fred recalls. "I knew who Queesto was as he was famous in Nuu-chah-nulth territory. He really was a big chief and he had composed some lively songs. I went to school with many of his descendants. Then there was this quirky connection wit Hollywood and the creator of the Mr. Magoo cartoon series when I was losing my sight. As a person aware of losing my eyesight I thought they were kind of dumb but I learned the importance of laughing at your disability... I still have the original cover artwork and it means a lot to me."