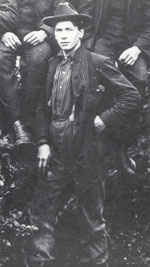 
Donald Bourdon of the North Shore Museum and Archives wrote and compiled a collection of photos by North Vancouver's first commercial photographer George Gordon Nye after they were donated in 1970 and an exhibition was held in the summer of 1979. Born in Brighton, England in February of 1885, Ney was brought by his parents to Vancouver in 1890. His father bought property in North Vancouver the present location of Sixth Street and Chesterfield Avenue. After the Boer War his older brothers also acquired land in North Vancouver his father served as a magistrate. At age 20, Nye opened his photography studio near Lonsdale Avenue and married in 1908. Soon afterwards he turned to carpentry. He died in 1958. He was not an unusually gifted photographer, but he did take an important full-length portrait of Chief Joe Capilano, circa 1906. Donald Bourdon joined the Glenbow-Alberta Institute in Calgary as an archivist after working for the City of Vancouver Archives and the North Shore Museum.