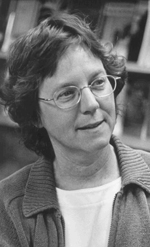 
Raised in Vancouver, she is the daughter of Fritz Bowers, a City councillor and then City Manager of Vancouver. She has an Honours English degree from UBC (1974) and taught Grade Five for several years in Nelson. She started freelancing in Victoria in 1981, at first with magazine articles, then with educational writing. A Western Magazine Award winner, her writing has appeared in Canadian Geographic, Beautiful British Columbia and other Canadian and U.S. publications. She has has also been a guest speaker for the Children's Literature Roundtables of Canada, and has won one of their Information Awards.

She and her family moved back to Nelson in 1990, and now live outside of town. She escapes into the wilderness to hike, ski or canoe as often as possible. Her first book for adults, In the Path of an Avalanche, recalls the events of January 1998 when six experienced back-country skiers were buried in in a Class 3 avalanche in the Selkirk Mountains. Bowers takes a scientific approach to the tragedy, explaining how avalanches are triggered, how they can be predicted, etc., while also recounting the drama of the search-and-rescue efforts, the invasion of urban media and the impact on friends and the local community.

Her non-fiction book Crazy About Canada won the 2006 Canadian Science Writers' Association's "Science In Society Journalism Award"; in the Children's Book category. Crazy About Canada: Amazing Things Kids Want to Know is illustrated by Dianne Eastman and published by Maple Tree Press, in partnership with Canadian Geographic magazine. The book answers actual questions sent in by children from across the country, such as, "Why are beaver's teeth orange?"; or "Where does the water come from that flows over Niagara Falls?"; or "What's that hairy thing underneath a moose's chin for?"; It features two cartoon characters-the author herself and her sidekick, Morton-who celebrate the notion of being curious, asking questions and tracking down information. Bowers previously won the same award for Crime Science in 1998, later reissued as Crime Scene. Another nationalist educational book, Hey Canada! (Tundra 2012), Illustrated by Milan Pavlovic, was shortlisted for the 2013 Christie Harris Illustrated Children's Literature Prize.

Articles: 5 Articles for this author
Info


Vivien Bowers of Nelson got the nod from students this year for her children's book Wow Canada! Kids voted for their favourite book on Canada Book Day, April 23. The Red Cedar Book Award goes to their top choice. -[BCBW AUTUMN 2002]


At the 2000 BC Book Prizes Vivien Bowers of Nelson won the Sheila Egoff Children's Prize for WOW Canada! Exploring This Land From Coast to Coast to Coast (Owl Books), an account of one family's trip to discover Canada, complete with campfires, souvenirs, photos and facts. "I did drag my children around the country for this book and their overall impression was that it was too big!"; said Bowers, "and I should have written about Hawaii instead!";

In the Path of an Avalanche (Greystone $22.95)
Article


Avalanches don't play favourites. Michel Trudeau, son of the former Prime Minister, was caught in a backcountry avalanche in B.C. in 1998; his body was swept into an alpine lake and never recovered. His family's mourning before the nation's cameras brought home the pain of such a sudden loss.
Last year's avalanche season in B.C. was the deadliest on record, killing 24 people including seven experienced back country skiers in southeastern B.C. who had travelled by helicopter to a remote camp. Included in the death toll was champion snowboarder Craig Kelly.
The following month seven high school students from Strathcona-Tweedsmuir school in Alberta were killed on Mount Cheops near the Rogers Pass summit. On February 3, 2004, a 51-year-old snowmobiler was killed 15 kilometres north of Castlegar in the Ladybird Creek area. Meanwhile a search was continuing near Nelson for a missing 36-year-old snowboarder and Pemberton RCMP identified a 29-year-old man who died in an avalanche on Cayoosh Mountain.
As a backcountry skier, award-winning author Vivien Bowers of Nelson knows the pull of fresh powder, blue skies and the 'human factor.' That's why she wrote In the Path of an Avalanche (Greystone $22.95), a chronicle of the devastating 1998 avalanche that took the lives of six backcountry veterans in the Selkirk Mountains near Nelson.
"It was important being a backcountry skier doing this book,"; she told me, "because a lot of people feel burned by some other people who've written, who don't understand why people go into the backcountry. For me it's the serenity, the beauty of it, the powder snow.";
Four locals and two skiers from the coast were killed. How could experienced skiers get into such trouble? Bowers deftly handles the technical information about avalanche conditions, illustrating the tricky science of avalanche prediction through the knowledge of experts at the Canadian Avalanche Centre.
Bowers shapes her narrative around a young woman named Lise Nicola; a free spirit, emblematic of those drawn to Nelson's extraordinary outdoors scene. She lived for the outdoors, but wasn't a risk taker and was highly regarded by her peers. She was hut keeper at Silver Spray cabin in Kokanee Glacier Park where the group landed via helicopter during Christmas break.
Written in the Silver Spray cabin log are the words: "How fine the line between excitement and fear, between life and death."; The Silver Spray skiers in 1998 were well aware of snow conditions, closely observing weather patterns, probing the snow pack with shear tests and performing mock rescues. After enduring a week of stormy weather in the cabin, they were presented with a gift on January 2nd: fresh powder framed by clear blue skies. They set out for an area they knew was safe for skiing-not too steep and protected by trees, but to get there they decided to cross the exposed Clover Basin.
This was the fatal mistake.
"The first indication of trouble may have been a whumph as the snowpack beneath the travelers' skis settled a few centimetres. That would have been the sound of the upper slab collapsing onto loose crystals below, shooting air out of the snowpack. The skiers may have actually seen the snow drop beneath their feet.";
The entire bowl swept down the mountain like a freight train. "It was all over in thirty seconds or so. Nobody could outrun something like that."; One member of the party had remained back at the cabin. Carrie Fitzsimmons waited through an agonizing day and night for friends who would never return-including her partner Rob Driscoll.
The following morning, a rescue helicopter surveyed the scene: "A massive avalanche had taken out most of the bowl, sending tonnes of snow to the bottom of the slope. The passengers in the helicopter could see the basin only in bits and pieces, but those pieces started fitting together to form a worst case scenario. At the toe of the slide, on the surface of an enormous jumble of avalanche debris, they caught sight of what might have been a pack or a jacket. Evidence of a disaster that nobody wanted to contemplate.";
Having interviewed many people associated with this story, Bowers skillfully re-creates rescue and recovery efforts, the ensuing big city media circus, and the reaction of family and community to it all. "I'm always weary of 20-20 hindsight,"; she says, "because, sure they were on a slope that avalanched. There are years when the conditions are so difficult you have to take that extra level of precaution, the normal rules don't seem to apply. "The other thing is understanding the human factors-like people remaining silent. They don't want to be a wet blanket to say let's turn around, and I've experienced that on groups I've been out with. They behave in ways they might not otherwise."; Since the 24 deaths in 2003 there have been efforts to issue more frequent avalanche bulletins, and better co-ordinate efforts, possibly through a new national body. Lise Nicola's father Vince carried a metal plaque to the site where his daughter and five others perished at Clover Basin in the summer of 2001. He bolted it to a rock high in the alpine. He tells Bowers thinking of his daughter's life and love of the outdoors has prompted him to become more involved in the outdoors. "Lise would have wanted that; she would have demanded that."; 1-55054-518-3


Getting an MB, eh

The character of Rachel, who popped up in Wow Canada! and Only in Canada!, and her cohort, Nelson writer Vivien Bowers, have joined flag-waving hands again for That's Very Canadian! (Maple Tree, $19.95), presented as "An Exceptionally Interesting Report About All Things Canadian."; We learn that MB, for instance, once stood for Made Beaver, meaning one good-quality, adult beaver belt and that a Hudson's Bay blanket, woven with four black bars, was worth 4MB. No mention, though, of HBC Reward Points. 1-897066-05-8