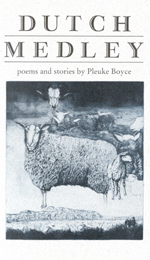 
Born in Zwijndrecht, Holland in 1942, Pleuke Boyce (neé van Dam) married a Canadian in Edinburgh, Scotland in 1961 and came to Toronto for one year, where she worked at a children's library. Moving to Antwerp, Belgium, she became a translator and an instructor of Dutch at the Berlitz School of Languages while writing for two Flemish newspapers. She lived in Zeeland, Holland for six years prior to moving to Errington on Vancouver Island in 1974. "When we arrived here, the place was full of American draft dodgers, interesting people from all over the world, who'd decided to become farmers. Unfortunately most of them have left over the years and gone back to the city." An author in both English and Dutch, Boyce received the 1990 Columbia University Translation Prize for her rendition of But This Land Has No End by Holland's Gerrit Achterberg. Her stories have appeared in Buffaloberries and Saskatoons, an anthology from Netherlandic Press, which also printed her collection of poems and stories, Dutch Medley (Windsor: Netherlandic Press, 1986), illustrated by Colleen M. Graham.


IN YOUR SPRING ISSUE YOU NOTED A DUTCH publisher, Van Gennep, will be bringing out books by two Galiano Island authors, Jane Rule and Audrey Thomas. As I am working on the Dutch translation of Audrey Thomas' Songs My Mother Taught Me right now (for Van Gennep), I thought I'd let you know the book will be published in September under the title of Isobel Aileen (Isabel Alone). I don't live on Galiano Island, but on Vancouver Island. Other books by Canadian writers I've translated into Dutch are Because of the War, selected stories by Norman Levine (for Van Gennep), and The Progress of Love by Alice Munro (for a different publisher, Goossens). I'm to do another Alice Munro book for Goossens, who has just bought the rights to all of Mavis Gallant's work.
Pleuke Boyce
Errington, B.C.