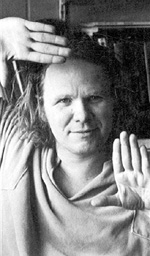 
Known professionally as bpNichol, Barrie Philip Nichol was born in Vancouver on September 30, 1944 and he died on September 25, 1988 having relocated to Toronto. He was esteemed by experimental writing factions in Canada as one of the members of the poetry ensemble The Four Horsemen (with Steve McCaffery, Rafael Barreto-Rivera and Paul Dutton) and the subject of a film by Michael Ondaatje, The Sons of Captain Poetry, made in 1970. He published more than 30 books of poetry, fiction and children's literature, and was particularly known for his sound and concrete poetry. He wrote songs, screenplays and ten episodes for the Emmy Award-winning television series for chidren, Fraggle Rock. His posthumous collection was entitled gifts: The Martyrology Book (s) 7 & (Coach House Press, 1990. It was the seventh volume of an ongoing text he called The Martyrology, begun in 1967 and first published in 1972 by Coach House Press. Prior to the so-called 'hippie' days of Kitsilano, bpNichol and bill bissett were experimenting with poetry's form and spelling outside the evolution of the Tish movement at UBC. Nichol briefly taught school in Port Coquitlam in the early 1960s before moving to Toronto in 1963. Stephen Scobie published an appreciation in The New Canadian Criticism Series entitled bpNichol: What History Teaches (Talonbooks, 1984); Douglas Barbour wrote bpNichol and His Works (ECW, 1992); George Bowering and Michael Ondaatje co-edited An H in the Heart: A Reader (1994); Roy Miki and Fred Wah edited Beyond the Orchard: Essays on 'The Martyrology' (West Coast Line, 1998) and Roy Miki edited Tracing the Paths (Talonbooks, West Coast Line, 1988). He was subject of a second film, bp: Pushing the Boundaries, directed by Brian Nash in 1997.