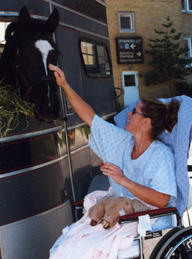 Unable to place her feet in the stirrups, she used two small whips to direct her horse, in lieu of her legs.

As outlined in Nikki Tate's juvenile biography Double Take: Karen Brain's Olympic Journey (Sono Nis $12.95), doctors discovered during a ten-hour surgery that Brain's lung was also collapsed from the weight of the horse on top of her during her fall. Brain received a new 12th vertebrae, from her 10th rib, enclosing it in a titanium cage.

"I hear models will remove their last ribs to get a smaller waist,"; she remarked, cheerfully, "so I guess I'm half-way there with one of my 10th ribs gone.";

Brain has since competed at the highest level in both able-bodied and disabled riding competitions. She won two Bronze Medals at the 2004 Athens Paralympic Games with the mare Dasskara, and won two Silver Medals in 2005 at the Dutch Open International Dressage competition for disabled riders in Helvoirt, Netherlands with the Dutch gelding Mozart.

In 2005, Brain moved home to BC, after living and training in Germany, the US and Eastern Canada for nine years.

Having represented Canada in 3-Day Eventing at the World Equestrian Games in Rome in 1998, with her horse Double Take, and won the Advanced Canadian Championships in 3-Day Eventing that same year, Karen Brain now hopes to win a gold medal for Canada at the Beijing 2008 Paralympic Games.