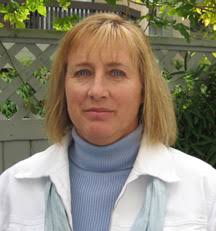 
Holding an MA in history, Kathryn Bridge has been an archivist (since 1978) and manager of access services (since 1997) at the BC Archives in Victoria.

She is the author of By Snowshoe, Buckboard & Steamer: Women of the Frontier, a look at the lives of four pioneer women in B.C. during the 19th century. The book earned the Lieutenant-Governor's Award from the B.C. Historical Federation in 1999.

Bridge's profile of Phyllis Munday, who reached the top of Mount Robson and made nearly 100 other ascents [also see Don Munday entry], was shortlisted for the VanCity Book Prize. Don and Phyllis Munday were a remarkable couple who made joint climbs from the 1920s through the 1940s, scaling more than 150 peaks, more than 40 of which were first ascents. As Active members of the Alpine Club of Canada, they climbed throughout the Pacific Northwest, including Mount Robson, which Phyllis Munday revisited in August of 1974, fifty years after her ascent. Bridge has told their combined story in A Passion for Mountains: The Lives of Don and Phyllis Munday (Rocky Mountain Books, 2006), illustrated by many climbing and family photos. Mount Munday was named in their honour by the Geographic Names Board in 1927.

Emily Carr in England (RBCM 2014) is an important contribution to writing about B.C.'s best-known painter, examining Carr's five years in England from 1899 (at age 27) to 1904. With historical photos and Carr's own sketches from the period, it includes some of Carr's comical stories about her life. One makes fun of the guest house where she lived; another describes an unsuccessful attempt to see Queen Victoria's funeral procession, and a third describes a painting excursion into the woods from St. Ives, Cornwall. While at the Westminster School of Art she was keen to participate in a segregated class for female artists drawing from the nude. "I had never been taught to think of our naked bodies as something beautiful," she wrote, "only as something indecent, something to be hidden... [The model's] beauty delighted the artist in us. The illuminated glow of her flesh made sacred the busy hush as we worked." Copies of the book were sent to Dulwich Picture Gallery in London to complement a major, new exhibit on Carr's art.

"European painters have sought to express Europe. Canadian painters must strive to express Canada. Misty landscapes and gentle cows do not express Western Canada, even the cows know that." -- Emily Carr

New research into the extent that Emily Carr's art evolved when she was abroad is the subject of a new exhibition at Whistler's Audain Art Museum. Emily Carr: Fresh Seeing: French Modernism and the West Coast (Figure 1 $40) has been published in conjunction with the exhibit (on until January 19, 2020).

Carr's early training in San Francisco and London had been conservative. It wasn't until she studied art in France between 1910 - 1911 that her whole approach to painting changed and she began to experiment with broad, loose brushstrokes and vivid, colours deemed "unnatural" for the time.

After her stint in France, Carr shipped back over a hundred of her oil paintings and watercolours to Canada. "It showed that she believed in these paintings, was proud of her accomplishments," writes Dr. Kathryn Bridge, co-curator of the Audain exhibit, "and thought she would profit from their sales."

But after Carr returned to B.C., her studio show of 70 French works generated few sales in the spring of 1912. A visitor commented on the "riot of colour...I confess I was a little startled. The blues seemed so very blue, the yellows so unmitigated, the reds so aggressive, the greens so verdant."

The French were more sympathetic. In fact, two of her works had been accepted at the 1911 Salon D'Automne. This was a vital venue for experimental artists such as Henri Matisse, Pablo Picasso and Paul Gaugin.

One of Carr's works chosen by the salon, Le Paysage (Britanny Landscape), has now been purchased by Michael Audain, founder of the Audain Art Museum.

"For the work of an unrecognized artist from Victoria to have been featured at such a prestigious international exhibition during the early 1900s was unprecedented," says Audain of Carr's inclusion in Salon D'Automne.

Reviews of the author's work by BC Studies:
Emily Carr in England


Last fall, 25 Emily Carr paintings and sketches were shipped from Victoria to the UK to appear in the first major international exhibition on Emily Carr at the Dulwich Picture Gallery in London.

The long overdue show coincided with the release of Kathryn Bridge's Emily Carr in England covering Carr's sojourn to England as a budding artist.

Carr arrived in 1899, at age 27, and returned five years later. While at the Westminster School of Art, Carr was keen to participate in a segregated class for female artists drawing from the nude.

"I had never been taught to think of our naked bodies as something beautiful," she wrote, "only as something indecent, something to be hidden...[The model's] beauty delighted the artist in us. The illuminated glow of her flesh made sacred the busy hush as we worked."

Kathryn Bridge's book includes historical photographs, Carr's own sketches, paintings and her so-called "funny books," some of which have never been published before.

One of her illustrated funny books makes fun of the guest house in which she lived; another describes an unsuccessful attempt to see Queen Victoria's funeral procession. A third describes a painting excursion into the woods of St. Ives, Cornwall.

"The five years Emily Carr spent in England at art schools have been largely forgotten or underappreciated in terms of her development as an artist and as a mature adult," Bridge says. "This is in part because in later life Carr did not dwell on this time, although she did write about some aspects in her book, Growing Pains."

Copies of the book have been sent to Dulwich Picture Gallery in London to complement the new Carr exhibit-some 105 years after Carr left.

"My motivation in writing this book was to flesh out these years and to use today's technologies-websites and digitized archival records-to learn the true identities of people she made anonymous in her writings through the use of fictional names," Bridge said. "I was able to make connections and decipher identities, to create a much more accurate chronology of her whereabouts and interactions, and to make connections between Carr and her peers."

The Vancouver Art Gallery has a permanent room to show Emily Carr's work, but it's the Royal BC Museum in Victoria that houses the world's largest collection of Emily Carr's art-more than 1,100 works of art (paintings and sketches), plus rugs, pottery and archival and library records.

The youngest of five sisters, Emily Carr was born in the year British Columbia entered Confederation, on December 13, 1871. A brother was born several years later. Her mother died when she was twelve and her domineering father died in 1888 when 'Millie' was 14. A much detested and pious older sister made her life miserable, sometimes whipping her, until Emily Carr was able to study art in San Francisco.

After returning to Victoria in 1895, she was invited by a missionary friend of her sister Lizzie to make the first of her forays into the primeval rainforests of the West Coast, visiting Ucluelet in 1899 where her sister was becoming a missionary. This trip stirred her interest in Aboriginal villages. On this trip she also gained her name from the Nuu-chah-nulth or Nootka people, 'Klee Wyck,' meaning Laughing One.

On her return voyage to Victoria, the ship's purser named William Locke Paddon fell in love with her-but it was "an immense love that I could neither accept [nor] return."

Partially to get beyond the persistence of her suitor, she saved enough money to continue her education in England.

During this period she reportedly collapsed in the fall of 1902 with acute anaemia and was interned in the East Anglia Sanatorium in Suffolk, England for health reasons that have never been adequately explained or identified. [Carr's mysterious and possibly damaging treatments for hysteria are at the core of Margaret Hollingsworth's novel about creativity and aging, Be Quiet (Coteau, 2003).]

Carr was not permitted to paint for 18 months during her enforced confinement, so she kept a sketchbook that reflects her experiences in the Sunhill Sanatorium. It became the gist of a book of hers first published in 1953 entitled Pause: A Sketch Book. Emily Carr came back to Canada in 1904.

Carr's dual adeptness at writing and painting once prompted George Woodcock to comment, "She would have made a good sister for William Blake."

Designed to accompany the exhibit in London, From the Forest to the Sea: Emily Carr in British Columbia (Goose Lane Editions $50) is edited by Sarah Milroy and Ian Dejardin and gives a panorama of Carr's entire career as an artist.