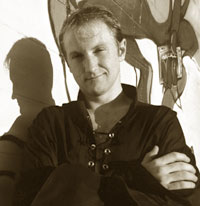 
Purists might dismiss The Rap Canterbury Tales (Talonbooks $24.95) as Chaucer for Dummies, but Baba Brinkman's hip-hop-hearted transpositions of Middle English into performance raps, illustrated by his brother and stage manager Erik, are easily justified. "The Canterbury Tales,"; says Brinkman, "has been preserved in dozens of manuscripts from the fifteenth century, but there are no surviving pages that were written during Chaucer's lifetime. Since we have no text written by his own hand, every edition of Chaucer's poetry must therefore admit the possibility of editorial corruption, either by the copying scribe, or in printed versions by the editor... This edition is no exception, but its primary purpose is to offer an interpretation of the Tales for the general reader."; Brinkman, who has tested his material at the Edinburgh Festival, cites rap music as the embodiment of what poetry should be, and once was. He notes that Chaucer presented his various tales in the context of a storytelling contest to unite a contingent of pilgrims riding on horseback from London to Canterbury. "The clearest analogy for this storytelling contest model in hip-hop culture is the phenomenon of the freestyle battle," he writes, "a live performance event that underlies the majority of recorded rap lyrics either in style or content." Brinkman concludes by saluting Chaucer's enduring genius: "No person I haven't met has affected me more, or taught me more about how to exist in the world."; 0-88922-548-6

Later Brinkman's off-Broadway play, The Rap Guide to Evolution was dubbed "astonishing and brilliant" by the New York Times in 2011.