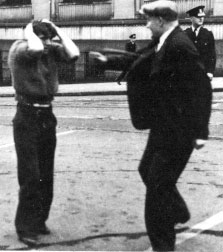 
As one of the leaders of the Vancouver Post Office occupation by the 'sitdowners' in 1938, Steve Brodie was singled out by police officials in the riotous aftermath. He later wrote a 24-page memoir:

Photo of Steve Brodie being questioned by police after the Post Office sitdown ended.