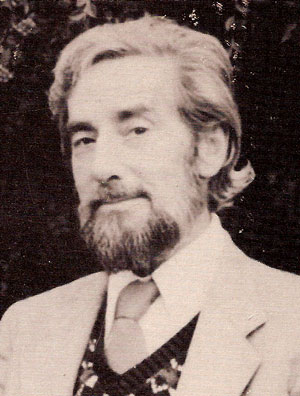 
"I'm an incurable mimic and there were times when that took over." -- David Bromige in conversation with Doug Powell.

Born in London, England on October 23, 1933, Bromige was a Canadian who retired from teaching literature at the Sonoma State University. He was on the periphery of the TISH poetry scene at UBC in the 1960s, mostly writing plays at the time. He published numerous poetry titles including Spells and Blessings with Talonbooks in 1974; then several books in the U.S. from Black Sparrow Press, most notably Desire: Selected Poems 1963-1987 and a volume of short fiction entitled Men, Women & Vehicles. In 1991 he released Tiny Courts in a world without scales (sic) which he describes as a 'Canadian' book. Bromige also taught at U.C. Berkeley and at the Jack Kerouac School of Disembodied Poetics at the Naropa Institute. He won the 1988 Western States Book Award for his Selected Poems. David Bromige died on June 3, 2009.

The Ends of the Earth. Los Angeles: Black Sparrow Press, 1968.

?I dreamt of some land where no one spoke my language? and there it was we met? I woke beside someone like you, speaking a kind of English, laughing?? ? David Bromige

David Bromige was on the periphery of the TISH poetry scene at UBC in the 1960s. TISH poet Fred Wah published Bromige?s first chapbook, The Gathering, from Buffalo, in 1965, having been urged to do so by poet/guru Robert Duncan, who Wah had met in Albuquerque, in 1963. ?I thought of him [Bromige] at UBC as an English poet,? says Wah. In fact, he was.

Bromige later taught at U.C. Berkeley and at the Jack Kerouac School of Disembodied Poetics at the Naropa Institute. He died in Sebastopol, California on June 3, 2009. Ten years ago, Rolf Maurer of Vancouver received an email from publisher Ken Edwards in London asking if Vancouver?s New Star Books wished to co-publish a collected works of David Bromige. Eight years later Maurer received a 1,200-page manuscript. ?So, I freaked out,? Maurer says.

After almost fifty per cent of the manuscript was jettisoned, Maurer eventually hosted ?a good turnout of people who knew David Bromige back in the twentieth century? at a communal poetry reading at Vancouver Co-op Books for Bromige?s 624-page retrospective volume, if wants to be the same as is: Essential Poems of David Bromige (New Star $45), co-edited by David Bromige, Jack Krick and Bob Perelman who praised Bromige?s ?appetite for poetry, the quickness of his wit, his unceasing eloquence and his goofiness.?