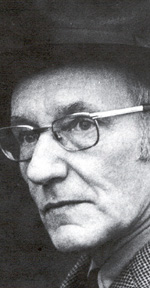 
William Burroughs first gained notoriety due to a censorship battle regarding his 1953 paperback Junkie. Associated with the Beat poets of San Francisco and City Lights Books, he is renowned for his 1959 memoir of heroin addiction entitled Naked Lunch. Burroughs screened his films and read from his works at 111 Dunsmuir Street on November 17, 1974 and returned to Vancouver, in July of 1988, for a Western Front exhibit of his 'shotgun art' -- paint gun splats onto plywood that Burroughs sold by mail until his death on August 2, 1997. He was also brought to Vancouver by Lenore Herb in 1981. Burroughs' presence had some influence in the evolution of experimental writing in Vancouver. He stayed at the Sylvia Hotel. Events dedicated to Burroughs were held at the grunt gallery at 350 East 2nd Avenue in Vancouver in 1999. [Michael Morris' photo of William Burroughs is featured in a history of the Western Front entitled Whispered Art History: Twenty Years At The Western Front, edited by Keith Wallace (Vancouver: Western Front Society and Arsenal Pulp Press)]