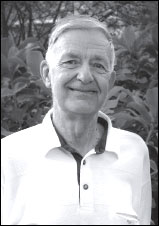 BIOGRAPHICAL DETAILS: Peter Buttuls was born in Riga, Latvia, in 1937 in a multicultural family with upper class background that spoke German, Latvian, and Russian at home. His grandfather had done much for the country in the areas of education, journalism, politics, and medicine. Because Peter's father had fought in the student army defending his beloved Latvia, his family, after living "underground"; for six months, was forced to flee Latvia in 1941 when Russia took control of that country. They chose to take refuge in Nazi Germany because Peter's mother was of German descent. In Berlin the family lost all their possessions and one life in an air raid. In 1951 the family had an opportunity to immigrate to Canada and start a new life there. After five years as settlers in a tiny hamlet in British Columbia, the family moved to Vancouver, where Peter attended the largest high school in Canada and later received his B.Sc.(Physics) at UBC in 1964. Three years later he obtained his M.Sc. at the University of Toronto, specializing in Meteorology. After only four months in that field, Peter moved to Edmonton, where he worked as a programmer-analyst for twenty-eight years before retiring to Victoria in 1995. In Edmonton he married Ena Wheelock, whose father had a very successful career with the Canadian Bible Society.