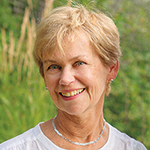 Wendy Elizabeth Cairns was a UBC graduate who worked at the electronic library of the Canadian Centre for Occupational Health and Safety in Hamilton, Ontario. Returning to B.C. in 1997, she began a history of UBC's Faculty of Medicine. Her extensive research, interviews and eloquent prose languished following her premature death but were taken up and extended by Doctors Cairns, Stuart, and Ostrow, becoming the foundation of this book.

I arrived in Vancouver in 1947 as an 18-year-old immigrant with full hopes that I would enter medical school here.

I learned with considerable anxiety that there was no medical school in B.C. and that the likelihood of one opening soon was not very-good. Only four years later I was in UBC Medicine's second graduating class, still located in former army barracks. Skeptics were abundant from before the school opened and throughout many of its early years: it was the dedicated deans, scientists and healing practitioners, who brought the dreams into reality.

The mastermind behind writing a history of B.C.'s medical school was Wendy Elizabeth Cairns. After her premature death in 2018 her husband and former Dean of the Medical School, John Cairns along with David Ostrow and Gavin Stuart (another former Dean) took up pen to expand and complete Wendy's rich material into this book.

The title Dreamers Skeptics and Healers accurately reflects the history of the medical school that admitted its first class after years of controversy in 1950 to become by 2021 one of the largest and among the five or six most respected medical schools in North America.

This is a handsome, easy-to-read book of about 200 pages with wonderful, often youthful pictures of many of the doctors, healers, scientists and administrators making the school what it is today. It is divided into seven parts starting with "Setting the Scene" with Dr. John Sebastian Helmke's ideas in 1870 for a health service for a then-fledgling population, and ending in 1949, when Dr Myron Weaver, the first dean opened its doors. The book ends with a proud "A first class Medical School" section in which the authors celebrate the research and innovation that has taken place over 70 years and put forward ideas for the future.

The middle sections recall how the school took off after years of arguments and disappointments, the unavoidable growing pains, then coming into a respected early maturity, leading to some unexpected turn-arounds to become a world famous medical school that started with 60 students per graduating class, (now 240 students per class), who are learning the arts and the sciences of medicine in almost every district of B.C.

Reading the various parts of this book I had a feeling of reliving my student days all over again as I came to the sections on how Dr. Kerr and Dr. Walters conducted our oral exams at the bed-side, how Dr. Friedman, the head and professor of Anatomy drew his diagrams on the blackboard with two hands at the same time or how Dr. William Boyd, head and professor of pathology entertained us with his witty lectures.

The vision and the legacy of each of the deans over 70 years is sensitively explained. Some visions came alive, some did not. For example, Dean McCeary's vision of the model of the "if they learn together, they will work together" teaching program for all health professionals toward integrated patient care by health sciences teams is still not a reality.

Each part introduces the leading figures in the various basic science and clinical faculties. The pictures of Dr. Copp of Physiology, Dr. Bryans of obstetrics and gynecology or Dr. Herbert of family practice and many others will evoke warm memories in former students. And of course, the politics. I was at the tense locked door meeting described in the book with Dr. Pat McGeer, a graduate of the school, accomplished neuroscientist, UBC faculty member and B.C.'s Minister of Education at the time. He issued an ultimatum to the university -- come up with a plan for increasing medical student numbers and a plan for a campus hospital or lose an unclaimed federal fund about to be closed off. Student numbers were increased.

The book will rekindle memories and bring some understanding to non-medical readers of the extreme complexity of gathering and maintaining the enthusiasm of dedicated practitioners, scientists and students of medicine and other health related professions with the goal of understanding nature and serving mankind.