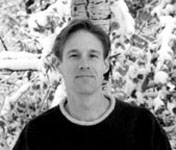 
Raised on a farm near Meadow Lake, Saskatchewan, Cariou holds a Ph.D from the University or Toronto and has lectured at UBC. His fiction, including stories that have appeared in Stag Lines: Stories by Men and Due West, won him a CBC literary Competition Prize in 1991. He wrote The Exalted Company of Roadside Martyrs (Coteau, 1999) and Lake of the Prairies: Autobiography of a Place (Doubleday Canada, 2001).

Articles: 1 Article for this author
The Exalted Company of Roadside Martyrs
Info


Warren Cariou's first book The Exalted Company of Roadside Martyrs is two novellas about flawed people in positions of authority. In The Shrine of Badger King, a Metis politician is representing a squalid northern riding, when his alter ego, Badger King, challenges his right to represent the people. In Lazarus, Father Silvan recklessly marries the town ne'er-do-well to Guadaloupe, his Mexican mail-order bride, then falls for the young woman himself. Cariou has won a CBC Literary Competition Prize. 1-55050-145-3