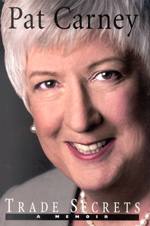 
Born in Shanghai, Pat Carney worked as a business columnist for the Vancouver Sun and the Province before moving to Yellowknife in 1970 to run a consulting firm. Later elected as a Progressive Conservative MP in Vancouver Centre, then promoted to Cabinet as Minister of Energy, Mines and Resources, she became Minister of International Trade and was named President of the Treasury Board in 1988. She was instrumental in negotiating Canada's so-called Free Trade agreement with the United States. In 1990 she was called to the Senate. She is the author of Trade Secrets: A Memoir (Key Porter Books, 2000). She has long lived on Saturna Island in B.C. where she began to hit her stride as writer, producing amusing personal essays and stories about local manners and matters.

Pat Carney's collection of fiction, On Island: Life Among the Coast Dwellers (Touchwood 2017) describes events, attitudes and behaviours on an unnamed Gulf Island. In April of 2017, On Island: Life Among the Coast Dwellers debuted at #15 on the BC Bestsellers List and soon made its way to #1 for several weeks. For at least 40 weeks it occupied a spot on that list, and spent 35 weeks in the top five. Carney wrote the stories as a resident of Saturna Island. See review below. 9781771512107 $21.95

According to her website: "As an educator, she was a Canadian pioneer in the development of distance learning systems and in 1977 she received the British Columbia Institute of Technology award for Innovation in Education for "diligent and creative work"; in the Satellite Tele-Education Program Hermes Project, one of 26 national projects to experiment with the world's first geostationary interactive communications satellite.

Articles: 1 Article for this author
On Island: Life Among the Coast Dwellers

Anyone who has lived on-island might well understand the simultaneous isolation and community connection. Remote communities, often difficult to access, can seem cut off from the rest of the world, and the people who inhabit these places must be both independent and cooperative. Pat Carney's collection of stories, On Island: Life Among the Coast Dwellers, explores these special aspects of Gulf Island life, both mundane and magical, that are woven together with threads of isolation and belonging, nature, and cats.

The opening story sets a fable-like tone, beginning "[o]ne sunny summer morning"; when a mysterious woman releases eight cats, then boards a ferry, never to return (p. 3). The cats, as independent and resourceful as their human counterparts, wind their ways throughout the vignettes of island life, connecting stories and characters.

Like the cats, human characters appear and reappear throughout the interconnected stories. The people are not named, which adds to the stories' fairy tale quality; instead, they are known by title or description: the Mountie, the Professor, the Church Warden, the Old Man, the Pirate Queen, and Blondie, the golden-haired "pagan princess-of-the-harvest"; (p. 63), with her dog, Goldie, and her golden cat. These are just a few of an eclectic cast of island archetypes, reminiscent of figures from myth and legend.

The people feel familiar, often recognizable, and their namelessness invites the reader to superimpose upon them a known or remembered person. The characters, both feline and human, find ways to connect and fit in -- as we all do - in ways that are both part of and separate from society.

Isolation, a recurring and connecting theme in this collection, is revealed in a variety of ways. The islands are "marooned in the ocean"; (p. 159), and stories like "Lights Out"; highlight the scourge of the islands: recurring power outages and loss of phone service.

Inability to communicate with the outside world heightens the sense of separation of island communities. The high cost of ferries and frequent storms compound the feeling of isolation, and the aptly-titled "Storm"; tells a tale of frustration as a woman attempts to get to the Mainland during intermittent ferry closures.

The small island featured in the stories also lacks the services and conveniences enjoyed by the Big Island (Vancouver Island) and the Mainland. In "Medical Clinic,"; a nurse practitioner visits the island just once a week and patients with serious ailments must travel to the Big Island by helicopter. Small Islanders must therefore be self-sufficient, and the medical clinic provides an "eclectic mix"; of alternative therapies "offered by island volunteers of various expertise"; (p. 113).

The separation -- and subtle umbrage -- that exists between the little island and larger, better-funded communities also reveals itself among its inhabitants. Distinctions are made between the small island and the Big Island and Mainland, and the persistent issue of who belongs, and who doesn't, surfaces and resurfaces. The loneliness of the outsider is poignantly explored in stories like "Nature Lovers"; and "Fish Fry,"; as the newly-arrived Professor and his wife try to fit in while experiencing the tension between "old-timers and newcomers"; (p. 140).

In "Battle for the Beach,"; islanders and off-island property investors clash when absentee land owners seek to privatize and limit access to traditionally communal, public spaces. The islanders' opinion of these invaders is revealed in their name for the gated communities that impede free access to previously public trails: Fascist Estates. What amounts to an ideological battle is fought in the multi-purpose Community Hall, "heartbeat of the island community"; (p. 98).

Islanders band together to save the beach and the salmon, to maintain the interdenominational church, and to help one another in times of need. They also instruct off-islanders about the "intricacies of island life"; (p. 94).

While Carney reveals the isolated and sometimes exclusive nature of island life, she also deftly illustrates a different, double nature of small communities: they are united and cooperative but also, at times, claustrophobic.

Café gossip over fair-trade coffee and gluten-free lemon cake is a reminder of ever-watchful eyes that scrutinize the comings and goings of the community. Secrets are never truly secrets, and the actions and indiscretions of individuals affect the collective. Island ecosystems are fragile and community ecosystems are equally vulnerable to disruption. These interdependent ecologies are reinforced by Carney's interconnected stories.

Mirroring the interconnection of waterways, ecologies, and communities, On Island: Life Among the Coast Dwellers is a delightful collection of stories that often feels magical and sometimes biographical. Those who reside on islands, or in any small town, will identify with the challenges, quirks, and joys of living in these independent and interdependent communities. Many rural B.C. readers will understand Carney's regular encounters with the same small cast of people -- the characters of day-to-day life - as they share the secrets and gossip and witness both rivalry and cooperation.

The organic, fair-trade, gluten-free lifestyle, and the appearance of a reusable cloth bag stamped "Save the Whales,"; might appear to be west coast stereotypes, but in Carney's hand they seem more like lighthearted pokes at archetypes of west coast life. Anyone who has lived in small B.C. communities will recognize the requisite artists, organic gardeners, and off-grid pioneers. Indeed, the stories are exquisitely Canadian, and Carney nods subtly to such national institutions as David Suzuki, Alice Munro, Tim Hortons and canned Pacific milk.

From her unconventional and deeply ordinary characters, to her description of the beautiful and misty landscape of gorse and blackberry, cedar and kelp forests, and the ancient and eternal tides and rhythms of life, Pat Carney reveals her obvious love of the west coast islands. Like a string of pearls, her stories glimmer with humour, insight, and poetic language.

John Donne wrote that "no man is an island, entire of itself,"; and indeed despite the differences that separate us, these stories remind us that we are connected to one another and to the landscapes we inhabit in a lineage of memory and story.

Pam Erikson graduated in 2016 with a BA in English at Thompson Rivers University, where she won several awards for writing and academic excellence. She has been a writer in diverse capacities, including a short stint at TRU's Marketing and Communications department, several research projects, and a play about homelessness. She is also an English writing tutor. Erikson lives and works in Kamloops, and in her spare time she can be found reading and coffee-shopping, and attempting to learn Welsh.