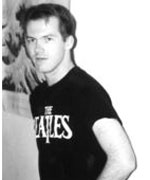 
George Case's debut fiction depicts the rise and fall of the information age. The city of Volgograd in Russia is devastated by a nuclear bomb and technology can't convey the horror of the disaster. "For the first time, the airwaves of the world had been struck dumb,"; writes George Case in Silence Descends: The End of the Information Age 2000-2500 (Arsenal, 1997 $12.95). See below.

Case came to Vancouver in 1994 from Sault Ste. Marie where he was born on June 18, 1967. He has published reviews and commentaries in the Vancouver Sun and Vancouver Review. Employed at the Vancouver Public Library, he has also contributed to All Wound Up: Alternative Writing From British Columbia (Ripple Effect Press, 2002).


This is a future history," says George Case, of his first published novel Silence Descends: The End of the Information Age, 2000-2500. Detailing the collapse of contemporary society, Case constructs a history that we have yet to experience. Its the end of the world as we know it.

But what is it really about? "It's a cautionary tale. The point is that we've become complacent about our future, assuming that information will make everything okay. Our society considers itself civilized because we can bank from home. But historical periods come and go, and we may be at the height of the current era. This book is about what could happen in the next five hundred years."

Case has invented people and events that will impact the lives of our descendents: from African philosopher Gedi (circa 2030-2110), to Grant McIvor, who will invent teleportation, to Tanis Leung (2227-2320) and her companion KI (2222-2301), who will help to develop the Community of Soul. "Any good history book names the figures in history that were influential in a way that requires that the reader know who they were, and what they did. This conceit makes it all feel authentic. I wanted to write a history book that kids would read in school one day."

Growing up in Northern Ontario provided Case with a necessary "skeptical distance from the great media wave of the early '80s, the popular sensationalist images that flooded the larger cities of Toronto and Montreal. It was all incongruous compared to the permanent geographical features of my environment." Even today, Case believes that we are at a critical period of human evolution. "In North America, especially, we are living in decadence, surrounded by these little distractions like O.J. and The X-Files."

Case is skeptical of the computer revolution, and what it holds for society's future. "Technology will only take us so far," he says. "The next revolution just might be spiritual. We no longer live the lives of cavemen-something we were for ten thousand years. We have reached a level of awareness, we've conquered the natural world with tools, and yet we all desire some spiritual contact." He's not opposed to computers and what they do, nor does Case believe in censoring the internet (although he does have opinions about the false democracy of computers and the internet). He simply suggests that what we have now may lead to problems; problems that, because they have been caused by technology and information, cannot be solved by them.

As might be expected, Case wrote Silence Descends in longhand, then transcribed the manuscript with a manual typewriter for submission. "This book is not a prophecy, but a critical response to the hype in our society."