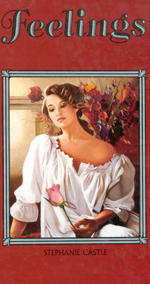 
Stephanie Castle is the pen name for a transgender author who underwent a sex change relatively later in his/her life. The intimate memoir of the difficulties faced in order to achieve a transformation of this kind are the subject of Feelings.

Castle has a lengthy list of achievements to her credit including the founding of the Zenith Foundation and the editorship of the house magazine Zenith Digest. She has also acted as a counsellor and advocate to, and on behalf of, transgendered people in the areas of human rights and prison reform.