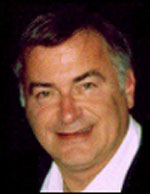 BIOGRAPHICAL DETAILS: Robert Cezar was born and educated in Montreal, Canada. He has written extensively on modern technology and business, and has had articles published in international magazines and technical papers.

La Guitarra is his first novel and he is in the process of writing two others. Robert has also written and collaborated in over 130 poems and lyrics, many of which he has set to music.

His earliest career began at the age of 14 when he was part of a band that won a talent contest on CKVL radio and was invited to appear on the Jack Parr Show. He has since composed twenty-four classical orchestral suites, three symphonies and over one hundred songs.

He has years of experience with various media, Internet and telecom technologies, and has directed several private and public companies. He is a visionary and the originator of more than 30 inventions, from Electronic News Gathering (Instant-Eye News) as a co-founder of CITY-TV in Toronto, to Video Tape Editing, game boards, International Telephone Call-Back systems, Web Site building systems, a patented Internet Advertising System called AdCast, etc.

He has traveled extensively in the Americas, Europe, the Middle East, and the Far East, and speaks three languages. He currently lives with his family in Abbotsford, British Columbia.