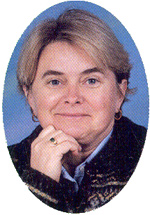 
Renee Carbonneau was born in St. Esprit, Quebec, in 1958. She graduated from Universite de Montreal in 1982 with a B.A. She pursued her prostgraduate studies at McGill University and completed a Master Degree in Library Science in 1984.

She spent 5 years in Ontario and worked at the Ontario Arts Council for 2 years. Afterwards, she taught yoga for several years in Quebec. Then, she moved to British Columbia and worked as an interpreter at the B.C. Ministry of Children Serveces in Kelowna.

After travelling around the world, she decided to return to Quebec. She had breast cancer in March 2003. This fall, three of her children's books have been published by Editions de la Paix in Granby, Quebec. The titles are Expres et Exipres, Le Roi des balcons and Les contes de ma mere Poule.