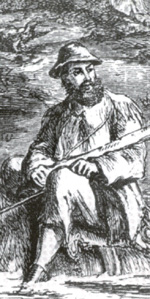 From the 1860s to World War One, B.C. literature largely con-sisted of British travel memoirs reporting on exotic British Columbia. Few are readable today. One of the earliest and best of this genre was written by English physician Walter Butler Cheadle. He and companion William Fitzwilliam (Viscount Milton) have been dubbed Canada's first "transcontinental tourists."; Three years earlier, Charles Edward Barrett-Lennard had published Travels in British Columbia, With the Narrative of a Yacht Voyage Round Vancouver Island (1862), but Cheadle was an "overlander"; whose perspective was unusually unfettered by the need to cast himself as an expert.

Almost half of Cheadle's lively and literate two-year chronicle in The North-West Passage by Land (1865), later republished as Cheadle's Journal of Trip Across Canada, 1862-1863, describes adventures in B.C. From Edmonton, Cheadle and Fitzwilliam crossed the Rockies through the uncharted Yellowhead Pass, rafting the Thompson River to Kamloops. They then toured New Westminster, Victoria and the Cariboo. They were greatly assisted by their Assiniboine Métis guide, Louis Battenotte, who brought along his family. The journal concludes with events in California and at sea; it reveals Cheadle as a shrewd observer of human nature, whether in the bush or the ballroom.

The North-West Passage by Land originally was falsely credited to Viscount Milton. By 1891 the book had run to nine printings. In its current edition, historian Stephen R. Bown claims, "It is a book that no lover of the west can ignore.";

British Columbia has been the subject for comments and books by dozens of writers who have mostly revealed their ignorance in the process.

Rudyard Kipling was swindled when he bought some property in Vancouver, but he gave confident opinions on both Victoria and Vancouver as he passed through, claiming Canadians were far more law-abiding than Americans. Frances Macnab, the pseudonym of globe-trotting journalist Agnes Fraser, reached B.C. via the new rail line in 1897. Like Kipling, she warned against the influx of invading Americans in her 369-page British Columbia for Settlers: Its Mines, Trade and Agriculture (1898).

One of the most literate travel memoirs of early B.C. was chiefly written by an English physician born in 1835, Walter Butler Cheadle, who has been dubbed "the first trans-Canadian tourist." His two-year chronicle (1862-1864) of his often arduous adventures with Lord Milton (1839-1877) began a spate of British travel literature about the exotic West Coast of Canada that would continue for more than 50 years. The original published version in 1865 was credited to both Viscount Milton and Cheadle, and achieved nine printings by 1891, although Cheadle was its sole author.

The contents of The North-West Passage by Land (London, Cassell, Petter and Galpin, Ludgate Hill, E.C. 1865) amounted to 397 pages. A 311-page compilation was posthumously published as Cheadle's Journal of a Trip across Canada, 1862-1863 (Ottawa, Graphic Publishers Limited, 1931) and reissued by Hurtig Publishers of Edmonton in 1971. It was re-published in 2010 within Touchwood Editions' Classic West Collection series, with a introduction by Stephen R. Bown who claims, "It is a book that no lover of the west can ignore."

Cheadle and Lord Milton came to Quebec in the spring of 1862. From Edmonton they crossed the Rockies through the uncharted Yellowhead Pass with William Fitzwilliam. With great difficulty they reached Kamloops, then toured New Westminster, Victoria and the Cariboo. They returned to England via Panama. The journal concludes with amused accounts of events in California and at sea, revealing Cheadle was a shrewd observer of human nature, whether in the bush or in a ballroom.

Back in England, Milton returned to the medical profession. He became a Member of Parliament for Yorkshire and dean of St. Mary's Hospital medical school (1869-1879). He died in 1910.

It is sometimes suggested that Cheadle's expedition might have been responsible for the naming of Mt. Robson, although the source of that name remains unproven.