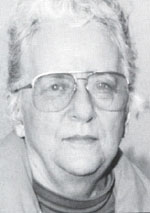 EMPLOYMENT OTHER THAN WRITING: Newspaper Reporter

AWARDS: Shortlisted for The Hubert Evans Non-Fiction Prize in 1996

"Bev Christensen has lived all her life in the area affected by Alcan's Kemano projects in Northern B.C. In 1969 she became a full-time reporter for the Prince George Citizen, for which she covered the controversy developing over the signing of the 1987 Settlement Agreement and Alcan's plans to remove even ore water from the Nechako River. In 1992, she recieved first prize in the B.C. Newspaper Award competition for a feature she wrote about the damage inflicted on the lives of the Cheslatta First Nations people as a result of Alcan's activities in their traditional territory.

"Too Good To Be True is Bev Christensen's second book. It outlines the 45-year history of Alcan's industrial activities in B.C., uncovers the back-room political deals that have made those activities possible, and discusses the roles Canada's federal and provincial governments must play in their attempts to reverse the dangerous precedents that the Alcan deals have set. It also examines the consequences for Canada and North America if these governments fail to address responsibly the mess that they themselves have created.

"On January 23, 1995, British Columbia's Premier announced that he was cancelling Alcan's Kemano Completion Project. But is such a simple political announcement all it will take to cancel this $1.4 billion hydro megaproject? Many tough questions remain: about who will pay for the cost of cancelling this megaproject, already half-completed at the time of Harcourt's announcement; about whether or not binding legal contracts dating from 1950 and 1987, between Alcan and the governments of Canada and British Columbia can be broken by a simple political decision; and about why Alcan has fought so hard to preserve a project which makes absolutely no sense, either economically or environmentally.

"As a Trustee for the Prince George School Board, Bev Christensen is an active participant in community-based concerns. As a director for both BC Rail and Westel, she is also no stranger to corporate concerns." -- Talonbooks publicity material