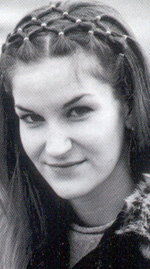 Hangman is filled with anecdotes about hangings throughout the centuries. It's the eighth of the Special X Psycho Thriller series and it doesn't hold back on the toppings. Headed by RCMP Inspector Zinc Chandler, a hard-nosed cast of police, reporters, lawyers and a crime writer try to solve a serial killer's taunting hangman games written in blood.

As each new hanged victim is found with one less limb, Michael Slade-a pseudonym for father-and-daughter writing team Jay and Rebecca Clarke-turns the gore up a notch to a level that some will find objectionable:

"The body hanging from the beam was missing a leg. The killer had used a hacksaw to cut it off. Draining blood dripped from the stump under the black dress to pool on the floor. The hacksaw lay beside the tongue in the pool. The severed leg had been kicked over against the wall. The muscles had contracted and the bone stuck out an inch. A chunk was chipped from the bone where it had snapped off the thigh. Blood that oozed out of the leg had been used by the hangman to draw the grisly gallows game on the wall."; 0-670-98480X