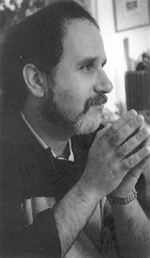 
Born on June 1, 1953 in New York, Cohen immigrated to Vancouver in 1986 to oversee the congregation at the Beth Tikvah Synagogue in Richmond. An ordained rabbi, he holds a Ph.D. in history of ancient Judaism. In 1999 he left Canada to take over a position in California. Cohen is unusual for dividing his writing between academic/relgious works and murder mysteries.

Shi'ur qomah: Liturgy and Theurgy in Pre-Kabbalistic Judiasm (University Press of America, 1982)
Shi'ur qomah: Texts and Recensions (1984)
Travels on the Private Zodiac: Essays on Jewish Life, Ritual and Spirituality (Moonstone, 1993)
In Search of Wholeness: Seeking Spiritual Integrity in a Delusional World (Moonstone, 1995)
Travels on a Road Not Taken: Towards A Bible-Based Theory of Jewish Spirituality (Moonstone, 1997)
The Truth About Marvin Kalish: A Novel (Ben Simon, 1992)
Light From Dead Stars (Coteau Books, 1996)
The Sword of Goliath (Coteau Books, 1998)
Heads You Lose (Ekstasis, 2003)

Articles: 2 Articles for this author
Heads You Lose (Ekstasis $19.95)
Info


Welcome to the strange world of Saul Jacobson, a young Bible professor who loses his wife, job and brother. He takes off on a Western Canadian road-trip and picks up a runaway teenager, whom he tries stubbornly to befriend. "Somehow the idea of sharing the road with a sullen 19-year-old who liked sweet coffee and whose mother had drowned herself appealed to me."; Cohen, a rabbi, is a crime writer and Bible scholar. Heads You Lose is touted as 'highly recommended for fans of Biblical decapitation.' 1-896860-93-1


Mikey Prager and Fred Finkleman run a successful, albeit unusual business -- providing decorated ice-cream tombstones to mourners so they can eat away their grief. But their venture takes a bizarre twist when they are asked to provide ice-cream matzevahs from an ancient Jewish cemetary in Prague in The Sword of Goliath (Coteau $19.95) by Martin S. Cohen.
ISBN