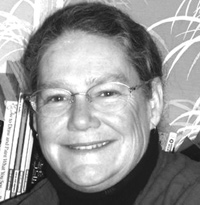 
Based in Victoria, Bev Cooke is the author of two children's novels. Feral (Orca, 2008), and Keeper of the Light (Conciliar Press). She was born and raised in Scarborough.

Articles: 1 Article for this author
Feral by Bev Cooke (Orca $9.95)


In Bev Cooke's compelling Feral, hunger forces Little Cat to leave the safety of dark subway tunnels for the bright but largely empty subway platform. "It's the safe-time, the sleep-time, when the earth-shaker ear-breakers run seldom and the two-legs are few.";

Little Cat meets the street kid Candlewax, "as agile and careful as any cat,"; who tosses Little Cat a chunk of Egg McMuffin. Candlewax steals candles from the church where he hides out and hawks them on the platform.

Candlewax is young, tough, scared. Feral. Just like Little Cat. Theirs is a violent coming-of-age. Little Cat endures the kicks
and blows of the two-legs and faces down rats, evil-fanged dogs and other, bigger, viciously territorial cats.

Candlewax, or Con as he calls himself, has escaped a "worms-in-the-head bad"; gang leader only to be targeted by a rival gang. The old gang Nightside will kill him if he goes too deep into the tunnels.

Out on the street the Crew is hunting him. Stay too close to the station, the cops will grab him and it's Juvie; and if Nightside doesn't get him there, then it'll be Crew. Either way, Con's "dead-meat.";

Katherine, herself involved in the gangs through a shifty, untrustworthy boyfriend, befriends both Con and Little Cat and then unknowingly unites them for the chilling climax of Feral, the second children's book by Cooke who, not surprisingly, is a cat-lover.