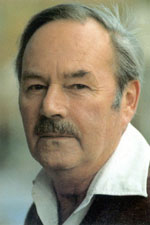 
A helicopter bush pilot for 20 years in the Canadian north, Corley-Smith has traced the development of B.C. aviation in several books. He has co-written Helicopters: The British Columbia Story, written a history of the Royal B.C. Museum and published a memoir, 10,000 Hours: Reminiscences of a Helicopter Bush Pilot. He flew in WW II wit the RAF (SOE) and received the Helicopter Industry Association's Award of Excellence in Communications at its international convention in Dallas. Published to mark the 100th anniversary of the Provincial Museum, White Bears and Other Curiosities actualyu tells the story of that institution's first 82 years, from 1886 to 1968. The second part of the story, from 1968 to 1984, appeared as the Ring of Time. The museum's first curator was John Fannin, who was succeeded by Francis Kermode, then Clifford Carl in 1940. With text by Peter Corley-Smith, the American freelance photographer Bruce McAllister published a photographic history Wings Over the Alaska Highway (Sono Nis, 2006), including stories pertaining to the airports between Dawson Creek and Fairbanks, Alaska. One chapter is devoted to the B-26 bombers that crash landed in the Million Dollar Valley in World War II.

Review of the author's work by BC Studies:
White Bears and Other Curiosities: The First 100 Years of the Royal British Columbia Museum

Articles: 1 Article for this author
Obit


India-born, England-educated aviation writer Peter Corley-Smith died on November17, 2002 in Victoria. After serving as an RAF pilot in WWII he became a miner, surveyor, cartographer, college instructor and spent twenty years as a Canadian bush pilot. (2003)