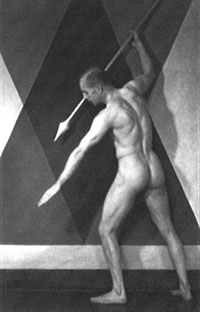 H.G. Cox was a pictorialist photographer in New Westminster who employed 'the Greek Art Principle' from the 1920s to the 1960s. After three solo exhibitions at the Vancouver Art Gallery in the 1930s as well as displays of his work at exhibitions throughout the world, Cox, the would-be author of an unpublished work to be called Dynamic Symmetry, faded from collective memory. His lost 'n' found archive of remarkable nudes and other works resulted in a revelatory exhibition at the Presentation House Gallery, curated by Bill Jeffries, entitled Athens on the Fraser: The Photographs of H.G. Cox, plus an accompanying book/catalogue entitled H.G. Cox: The British Columbia Pictorialist (North Vancouver: Presentation House Gallery, 2004).

One of Cox's most noteworthy exhibitions, The Book of Muriel, according to critic Neil Wedman, was a series of "eighty eye-popping photographs of a teenaged nude model, Muriel Dierrsen, lolling upon the sands at Boundary Bay," but although Cox's work was an effort to be avante-garde in the realm of his fellow Vancouver photography colleague John Vanderpant, his work was not designed to be risquÃ©. According to one of his nude models, interviewed when she was aged 84, "it seemed Cox had no interest in sex at all. He was an artist and was completely focussed on his art." Much of Cox's work featured miniature sets of vaguely orientalist interiors to evoke his painterly vision. His career from 1924 to 1955 embraced the rise and fall of a photography movement known as pictorialism. According to critic Sylvia Grace Borda, "Pictorialists were concerned with photographic aesthetics, especially surface treatment and composition, all in the service of returning the image to a 'higher state of consciousness'." The aim was to elevate photography above the level of mere mechanical reproduction, partially in response to the invention and the introduction of the Kodak camera by George Eastman that had enabled amateurs to take photographs without much concern for art. According to Borda, "Much Pictorialist work incorporated symbolic and romantic subjects in soft-focus and awash in moody lighting, as a counter-balance to the 'reality' of nature."

Curator Bill Jeffries' critical and biographical summary is reproduced below, by permission.

Articles: 1 Article for this author
Athens on the Fraser and H.G. Cox: British Columbia Pictorialist
commentary by Bill Jeffries


This book had its origins in an exhibition titled Athens on the Fraser - the Photographs of H.G. Cox at Presentation House Gallery in June and July, 2003. Until that exhibition Cox's photographs had been more or less lost to history, stored in the basement of one of his descendants since his death in 1972. Cox, though unknown from 1960 to 2003, was a bit of an art star in 1930s Vancouver, which was, as the following letter excerpt shows, a very different time from the present. In April 1933 the business manager of the Vancouver Art Gallery sent Cox a brief note after he had shown his photographs at the Gallery: "I enclose a small account for out-of-pocket payments by the Gallery in respect of your exhibition of pictorial camera studies...If therefore you can, without inconvenience, let me have a remittance, I shall very much appreciate it."; The amounts in question were $3.18 for printing invitations and $8.90 for the cost of printing the catalogues. The Depression was in full swing in 1933 and the Gallery, in another letter, informed the artist that "a charge of $15.00 laid down by the Exhibition Committee will be reduced to $10.00."; That exhibition was one of three solo shows that Cox had at the Vancouver Art Gallery in the decade of the 1930s. These early VAG shows, often rumored to be 'just' exhibitions in which the artist rented the space, were in fact adjudicated, after which some 'rent' was owing to the fledgling gallery.

H.G. Cox was born in England in 1885 and attended the Kidderminster School of Art in the years before emigrating from England to Canada in 1908. In 1911 he moved to New Westminster, taking up a post with the engineering branch of the B.C. Electric Railway Company. He was rejected for military service in the First World War on medical grounds. From 1913 to 1941 he was employed by the Public Works Department of the Provincial Government, based in New Westminster. He spent the Second World War with the military in Victoria, returning to New Westminster after 1945, where he lived until his death in 1972.

Cox's earliest known photographs date from around 1924. Within a few years he became an active member of the international Pictorialist salon movement, showing his pictures in the 1925 to 1940 period at exhibitions on four continents, from New York to Los Angeles, London to Lucknow, and in France, Italy, Spain and Sweden. He was part of the network of camera clubs on the West Coast, establishing friendships with photographers in Seattle and Portland.

Unlike his Vancouver colleague John Vanderpant, who declared his separation from Pictorialism in 1928, Cox subscribed to the Pictorialist ethos wholeheartedly until about 1936. His later pictures gradually became less 'tonal' and more clearly defined, a shift that was obvious by the time of his third solo show at the Vancouver Art Gallery in 1938. That exhibition, The Book of Muriel, consisted of eighty photographs of a single nude model, some of which bear a striking resemblance to images Edward Weston made around the same time. Cox, somewhat belatedly, absorbed the implications and techniques of 'The New Objectivity' just as the Second World War was about to break out.

According to Clarence White's definition, the pre-1938 Cox was a Pictorialist. In the 1920 volume of Pictorial Photography in America, White wrote a foreword meant as a reminder of Pictorialist first principles: "To many people photography is merely a mechanical process. To an increasing number, however, photography is being seen as an art, by which personal impressions of nature and human life may be expressed as truly as by the brush. These workers in photography see in it a medium by which the action of light upon sensitive surfaces may be so controlled as really to interpret scenes and persons in the individualistic spirit of a true art."; Pictorialists, including Cox, intervened in the making of their pictures so as to take them beyond what would obtain if cameras, photo paper and film were simply left to their basic mechanical procedures.

The question of whether there are, or were, specific Pictorialist subjects has been around since at least the 1920s. Writing in his Principles of Pictorial Photography (1923) John Wallace Gillies states that there are not: "The pictorial worker is without restriction as to subject matter as long as he does something practical with it. He can very well make a picture of an old shoe if he creates a picture with the material he selects, seeing to matters of arrangement and control of values in such a manner that the average man will be impressed, not so much with the pictures and subject matter itself, but by the way the subject is handled."; The distinction between 'creating a picture' and the now more common 'shoot a picture' is instructive, as it positions Pictorialists as interventionists, not unlike today's users of PhotoShop.

We know Cox's photographs were carefully composed. In the 1920s he composed intuitively(see Margaret Armatage's comments in her interview in this volume), but by the late 1930s Cox took up the principles of 'dynamic symmetry' proposed by Jay Hambidge, about which Cox wrote a book (unpublished). Dynamic Symmetry posits, among other things, that the Golden Ratio, or Golden Mean, can aid artists in making good pictures as well as telling viewers, after the fact, why certain pictures seem to 'work' and others not. Pictorialists, including Cox, used these principles as a means to an end and as a means to analyze ends - in both cases the 'end' was the pursuit of the idea of 'traditional beauty'. That pursuit may, in retrospect, be said to have been overshadowed by Modernist photography in the 1920s and 30s, but the mathematical basis of Cox's compositions gives them partial Modernist credentials even though his subjects were more often Symbolist than Modernist. Cox's pictures are certainly an extension of prior practice, and they could be said to rely on ideas that Alfred Stieglitz promoted in Camera Work in the early 20th century. Cox's graduated tonality and partial fuzziness are the same as Steiglitz's and Edward Steichen's from the period around 1910. In Pictorialism the dialogue between truth and beauty found an open-ended forum through which the exploration of photography as both recording device and as 'means of expression through image manipulation' found an outlet. In Cox's work we see the mood of a prelapsarian world of his imagination, but one using New Westminster, British Columbia as its setting.

Cox worked within parameters formed by previous generations of photographers in other cities. Within those parameters he is probably the best practitioner that Vancouver has ever known. He was an 'amateur', with full-time work in another field; the same relation to 'the job' as his contemporaries William Carlos Williams and T.S. Eliot. Cox was not unusual in this among Pictorialists. Max Thorek in Chicago was a doctor who founded a hospital bearing his name; Charles Archer worked for the Carnegie Steel Company in Pittsburgh; A.D. Chaffee was a doctor in New York City and Cecil Atwater an office manager for the Liberty Mutual Life Insurance Company in Boston. Cox's day job in the 1930s, as 'inspector of dredging', on the Fraser River, raises the distinct possibility that he had time on his hands with which to pursue his avocation.

The question of whether Cox's images have a link to Romanticism depends on whether Romanticism can be said to have its origins in a rejection of science and the objectivity that science supposedly brings with it. His tabletop tableaux, utilizing tiny porcelain figurines, resemble work by other Pictorialists and prefigure the table-top work of Post Modern photographers in the late 1970s and 1980s. His nudes, exhibited freely in the 1930s, may cause us to wonder about his intentions, but his entire approach to the nude follows a path laid down some twenty years earlier by Anne Brigman in California. In my interview with Margaret Armatage, she states clearly that Cox 'had no interest in sex'!, which cannot be entirely true as Cox did have a number of children, but does express her perception of his behaviour when she was his model. In the introduction to 'his' Dynamic Symmetry, Cox reveals an early sensitivity to gender issues: "the reader will meet with what may appear to him or her an intricate....";. One has to wonder how common such a formulation was in the late 1920s. Cox's book was about what he called "the Greek Art Principle";. Cox's photographs invite viewers to find in his pictures a balance between and among differing human qualities, the search for beauty foremost among them. I would propose that Cox was balancing the Apollonian and the Dionysian urges in his photographic construction of 'Athens on the Fraser'. Cox's life on the Fraser River seventy years ago provides a window on some forgotten aspects of B.C's past, perhaps revealing that Greater Vancouver was a much more cosmopolitan and Dionysian place in the 1920s & 1930s than has been previously assumed.

The photographs in the Athens on the Fraser exhibition span the period from 1924 to 1945 and were drawn from a pool of about 1000 vintage prints owned by Cox's descendants. Many other Cox images, including industrial scenes, such as the construction of the Patullo Bridge photographed from the aerial view of the ironworkers, exist only as negatives (mainly 2.25"; X 3.25";) with no corresponding prints.