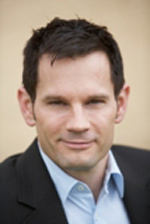 
Born in Vancouver, Daniel Edward Craig has conceived a Five-Star Mystery Series to follow the adventures of hotel manager Trevor Lambert, Director of Rooms, the consummate host turned house detective in a glamorous New York Hotel. In the third volume, Murder at Graverly Manor, hotelier Trevor Lambert purchases a bed-and-breakfast in Vancouver's West End only to encounter vanishing occupants, screams in the night, and an enigmatic proprietress who spins tales of deadly secrets and royal bloodlines. It's now available online and at respectable bookstores as well as a few disreputable ones.

Craig has worked for luxury hotels across Canada, including stints as Vice President of Opus Hotels in Vancouver and Montreal. He received his B.A. from UBC in 1992.