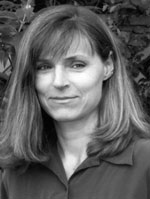 
Dede Crane, a former ballet dancer and choreographer, has written a first novel about a recently retired ballet dancer whose husband and young son are killed in a car accident. In her novel Sympathy (Raincoast, 2006), the protagonist named Kerry is placed within an experimental clinic for the treatment of Post Traumatic Stress Disorder victims. Among the lost souls of the clinic, the catatonic Kerry becomes a catalyst for Dr. Michael Myatt to uncover his own repressed childhood trauma. [See review below]

Crane's first young adult novel, The 25 Pains of Kennedy Baines (Raincoast 2006), features a fifteen-year-old protagonist who has an annoying sister, a disappointing boyfriend, irresponsible friends and a mother who might be having an affair. Kennedy takes comfort from her favourite novel, Pride and Prejudice, while making a list of her 25 main "pains" in life. In this story for older teens, an equivalent character to Jane Austen's Mr. Darcy arrives in the form of a handsome 18-year-old from England who visits as the son of her mother's friend.

Crane's first short story collection, The Cult of Quick Repair (2008), was simultaneously released along with a collection of non-fiction stories, Birth, The Common Miracle (2008), which she has co-edited with Lisa Moore. Having studied Buddhist psychology at the Naropa Institute in Colorado and Psychokinetics at the Body-Mind Institute in Amherst, Massachusetts, she now lives in Victoria with writer Bill Gaston.

Dede Crane's young adult novel Poster Boy (Groundwood $18.95) explores how a dire illness can unravel even the most well-adjusted family. Sixteen-year-old Gray Fallon is blessed with easygoing parents-a university science professor and silkscreen artist-as well as a part-time job at the Cineplex, some good friends and a hot new girlfriend. When his younger sister Maggie is diagnosed with a rare form of cancer, Gray determines that his mother's silkscreen chemicals may be responsible. His mother has a breakdown; his father gets angry; he quits school and retreats to an organic farm.

Twice shortlisted for Victoria's Butler Prize, Dede Crane has fashioned a suite of stories emanating from the fictional Wright family for Every Happy Family (Coteau 2013). Married parents Jill and Les are beset by normal challenges such as a mother wit Alzheimer's and a cancer diagnosis that Les keeps secret. Life must plod on. An adopted daughter explores her roots; eldest son Quinn combats shyness; younger son Beau copes with boarding school. A family grows.


Critic Anatole Broyard once suggested that the one fundamental question to be asked about a new novel is, "Is it necessary?"; This remark is famous, I think, because of its tendency to stick in the mind. I've toyed with it over the years, as if turning a hard candy over and over in my mouth with my tongue. What makes a book necessary? And, necessary to whom? Sympathy, by Dede Crane, is a tender, luminous novel of sympathy for those among us who are most emotionally wounded. Set in the Post Traumatic Stress Disorder wing of the Rosewood Clinic, it's the story of a ballerina grieving her husband and son, both of whom died in a car accident. It's also the story of the three or four other patients of handsome Dr. Michael Myatt, an idealistic empath with some unresolved identity issues of his own. Partly set in the Pacific Northwest and dealing, as it does, with shock and grief, Sympathy may remind some readers of Marilynne Robinson's Housekeeping, this reviewer's favourite novel. Working out at the gym this morning, I thought of the protagonist, Kerry, doing her physical repatterning exercises as devised and supervised by Dr. Myatt. It took me a few minutes to recall she's a fictional character! I felt I shared her experience. (To a point. The novel could be criticized for a certain romantic-i.e. unlikely-gloss: she's a world-famous ballerina; her parents are well-off and still together. At thirty-four, she was a happily married homeowner with a child. She had more in place before she lost it than many people ever get. But then, pain can't really be comparatively evaluated.)

Margaret Atwood has said that it is unrealistic for a writer to strive for resolution at the end of a novel. "Insight alone is sufficient."; She adds, "Insight alone is an achievement."; Sympathy succeeds in engaging the reader in the troubled emotional worlds of its characters. We try on their traumas ("How would I cope if this happened to me?) and we root for them to unfurl, to forgive themselves and reach out, at the very least toward life's small pleasures.
Unlikely alliances occur: a stout, black nurse dotes on a gangly, pimpled, white teenager. She leaves him oranges, which he loves, on his bedside table. In the grey hospital room, the small gift shines warmly, like a small sun. In that none pass through life unscathed, and some us are more scathed than others, and given that grief, shock, and PTSD more often than not go inadequately acknowledged, let alone treated, in our society, this novel could be balm for the wounded. (T.S. Eliot: "I read to feel less alone.";)

Although the would-be healer, Dr. Myatt, has some problems himself, the care with which he watches over his flock, making minute notes on their progress, must in itself be healing, no matter the specific content of his theories.
We should all be so lucky, in our hour of need, to be booked into the plushy, caring, private Rosewood Clinic! Simply written in short, easy to pick up and put down bursts, Sympathy's prose is cinematographically transparent. Crane writes simply, so you are unaware of the story as writing- rather, you experience it directly. Do you know who wrote, "One shouldn't be aware of the writer turning pirouettes on the page?"; John Updike, of all people! The greatest pirouetter of them all.)

In Housekeeping, the church ladies who come to visit and offer their condolences murmur a plainsong that rings in my head. "The world is full of sorrow."; The rejoinder: "Yes, it is."; And because it is, Sympathy is necessary. As readers, we can be thankful this author has made us a gift of her careful observations, honouring the small details of life- institutional life, in particular- and thankful for the goodness in her heart, from which this finely-wrought work clearly springs. 1-55192-781-0

--Review by novelist Diane Atkinson, who has recently returned to live in British Columbia.


Dede Crane's first short story collection, The Cult of Quick Repair, has been simultaneously released with a collection of non-fiction stories, Birth, The Common Miracle (2008), which she co-edited with Lisa Moore. Having studied Psychokinetics at the Body-Mind Institute in Amherst, Massachusetts, and Buddhist psychology at the Naropa Institute in Colorado, Crane, a former ballet dancer and choreographer, now lives in Victoria with writer Bill Gaston.