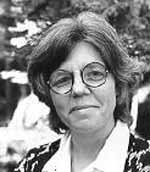 
"I often think the Canadian government would have much better luck spotting the Sasquatch than the Canadian identity." -- Susan Crean

Chair of the Writers Union of Canada in 1992, Toronto-born Susan Crean has been a member of This Magazine's editorial collective and a frequent spokesperson on feminist issues, cultural policies and politics. She lived on Gabriola Island, in Vancouver and in Ontario. Much of her work has been concerned with women and their struggles for self-determination and expression, including a biographical portrait of Grace Hartman and study of women in media. Her examination of the life and work of Emily Carr, The Laughing One, received a B.C. Book Prize in 2002. Compiled from previously unpublished sections of Emily Carr's journals and correspondence, and with an introduction by Crean, a follow-up volume entitled Opposite Contraries includes passages about Carr's first meeting with Sophie Frank, a Squamish basketmaker who became Carr's friend. [See Emily Carr; also see review of Laughing One below]

Articles: 1 Article for this author
The Laughing One: A Journey to Emily Carr (Harper-Flamingo $32)
Article


Near the end of The Laughing One: A Journey to Emily Carr (Harper-Flamingo $32) Susan Crean describes an incident that happened several years earlier when she gave a talk about Emily Carr's use of aboriginal material in her painting and writing. She was followed at the podium by Lee Maracle who delivered a "stinging rebuke"; of Crean's appropriation of her people's stories. Crean was mortified. "It was,"; she writes, "tantamount to being called a racist."; The next day Crean sought out Maracle who said that if Crean wanted to rehabilitate a racist that was her problem. Crean places that incident in the context of her other first-hand experiences of the appropriation issue. On Gabriola Island, for instance, where she lives for part of the year, she attended a meeting at which elders of the Snuneymuxw (Nanaimo) First Nation challenged the Chamber of Commerce's use of Native petroglyphs for their logo. Although they are described at the end of the book, such confrontations might well have served as a preface, for they constituted a crisis that changed the focus of Crean's work on Emily Carr. During a sleepless night after Maracle's denunciation, Crean faced the fact that to write or work cross-culturally and cross-racially these days means "bumping into"; your own prejudice. From that point on her purpose became two-fold. She embarked on a full-scale exploration of Carr's use of aboriginal material--placing it in its historical context. That context includes a history of logging, the environmental movement in general, the Clayoquot Sound protests in particular, and the potlatch trials of 1922. She also examines the psychological and moral implications of Carr using non-White societies as a means of discovering herself.

At the same time Crean embarked on a parallel journey of self-discovery, exploring her own position and purpose in writing Carr's life--was it to exonerate, vilify or understand? As part of this quest she visited Carr's old haunts--the Native communities of Ucluelet, Alert Bay and the Haida Gwaii. While her descriptions of landscape and personal encounters qualify as excellent travel writing, Crean's personal journey is more significant than the geographical one. It is the linked exploration of the author's and the subject's moral positions that provides the book's uniqueness. Crean has said emphatically in interviews that her book is not a biography. It is true that the conventions of biographical writing are often rigidly observed, but this is a limitation of the genre rather than its defining characteristic. Good practitioners always extend the boundaries of their art form, and doing so does not disqualify them as practitioners of that form. The relationship of author to subject, and the tricky business of working it into the narrative, is a preoccupation of all serious biographers. The chief virtue of Crean's work, in my judgement, is her full-scale exploration of that relationship.

Most reviewers (my delayed review copy arrived packaged with a complete set of previous reviews) have singled out Crean's fictional recreations of the encounters Carr may or may not have had with fellow artists, such as Frances Hodgkins, Sophie Frank and Georgia O' Keeffe, and with the ethnographer Marius Barbeau. These fictional scenarios are neither the most well-conceived nor well-executed parts of the books. Fictional recreations have become a fairly common feature of post-modern life-writing, as exemplified by biographers of Charles Dickens, Frederick Law Olmstead, and Ronald Reagan among others. Moreover, the voices in Crean's imagined conversations are not clearly enough distinguishable from her own and each other's. Also, the positioning of these novelistic passages at the beginning of each section, makes them seem like sops thrown to the reader to make the closely argued expositions that follow more digestible. Yet, it is precisely the polemic that separates this book from previous biographies of Carr, and gives it a special distinction. 0-00-200062-8