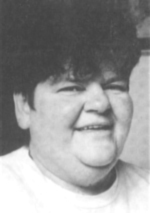 
An actor, playwright and director in Canadian alternative theatre, Jackie Crossland appeared in numerous films, including McCabe and Mrs. Miller, and had numerous plays performed in Vancouver, Toronto, Montreal and Los Angeles. She wrote the play Collateral Damage: The Tragedy of Medea (Press Gang, 1992), a feminist reworking of Euripides' Medea myth. It was first performed at the Vancouver International Fringe Festival in September of 1991, then remounted at the Vancouver East Cultural Centre in December of that year, directed by Crossland, with an all-women cast. In the classic play, Medea is a vengeful madwoman who kills her children when her husband leaves her for another woman. In Crossland's version, there is a comical dimension as women portray male characters and the protagonist Medea mostly copes with her problems without violence. Earlier Crossland published Honey (Talonbooks) and Rinse Cycle (Talonbooks).